Worldwide, properties tend to be built according to certain standards which generally take into account the severity of the predominant natural perils affecting a particular region. For instance, homes located in windier coastal or exposed regions of Europe can be expected to withstand higher wind loads from extratropical cyclones (ETC) than those in more shielded areas.

But knowing how the climate affects the trajectory of impacted properties is essential to buildings accounting for that risk. Extratropical storms, which tend to reach their maximum intensity during the winter months, are one of the most severe natural hazards affecting Europe. The ETCs are fuelled by the temperature differences between warm subtropical air masses and the cold polar air. They can reach gust wind speeds up to 200 kilometers per hour (nearly equivalent to a Category 2 hurricane) and keep their energy even after their landfall. Their activity is governed by large-scale climatic patterns and can display large regional variations both in frequency and severity. This puts an additional temporal strain on properties in particular regions of Europe.

Many research studies have shown much of the variability in this storm activity in Europe can be explained by the North Atlantic Oscillation (NAO) pattern. The NAO is an atmospheric circulation mode driven by relative changes in the atmospheric pressure gradient between the Azores and the North Atlantic region. It has a strong influence on the strength and position of storm tracks over Europe.

There are two distinct, opposite, phases of this oscillation:

The mean winter NAO conditions are, to a certain degree, predictable and several research organisations regularly issue a NAO forecast. Taking advantage of this improved skill in the forecasting of the mean winter NAO conditions, CoreLogic® collaborated with leading European universities to generate insurance loss scenarios representative of the two opposite phases of the NAO. Understanding the scenarios is paramount to better protecting portfolios in the region by taking into account the full spectrum of risk.

The loss scenarios are based on composites of all extreme NAO phases of a 1200-year long, quasi-historical simulation of the European storm climate generated with an Earth System Model (ESM). The results of this fully dynamical simulation have been compiled and incorporated in the CoreLogic Eurowind™ Model, which is part of the RQE® (Risk Quantification & Engineering) platform.

Using CoreLogic 2014 Insured Exposure Database (IED) the figures below clearly show the regional impact of the NAO on Average Annual Losses (AAL). The increased regional storm frequencies and shifts in tracks during the respective phases of the oscillation have the largest impact on peripheral regions of Europe. The impact, which can amount to nearly a doubling of the AAL, is particularly pronounced over Scandinavia during the positive NAO phase and the Iberian Peninsula during the negative NAO conditions. 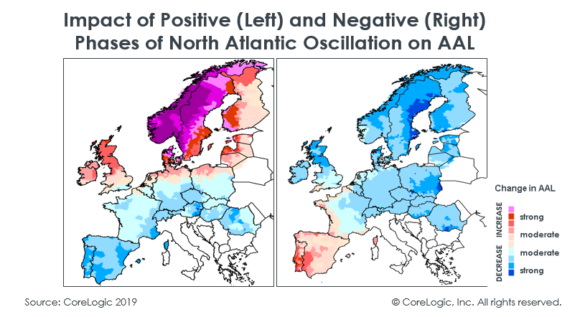 Collaborating with universities and research organisations is important for two reasons— not only to continue to better understand the impact of climatological variability on property losses but also to protect homes and homeowners by better educating them on their complete view of risk. For more information and to learn about the CoreLogic commitment to Get the Whole Story™, visit corelogic.com/products/european-windstorm-model or email hazardrisk@corelogic.com.

Dr. Kuhnel is holder of postgraduate degrees from Swiss and Australian universities with more than 25 years of professional experience. Having worked for various commercial and academic organizations on different continents he gained expertise in the development of innovative risk assessment tools. Senior member of the CoreLogic Paris Model Development team for the past thirteen years he helps clients to better understand their exposure to natural perils.

Dr. Eddounia is Senior member of the CoreLogic Paris Model Development team. She received a Doctorate degree in Science and Environment from Ecole Polytechnique in France.

Virus’ Presence a Reason for Case Against Ohio Insurer to Proceed: Judge