The State of New York may be on the verge of making the same mistake that has driven Florida auto insurance premiums through the roof, and that did the same in California until its high court learned the error of its ways.

Legislation currently racing through the New York State Assembly would drastically shift responsibility to police unfair claim-settlement practices away from the Department of Financial Services and toward the tort system. Assembly Bill 5623 would make it far easier to sue insurance companies for alleged “bad faith,” including by extending standing to third parties to bring direct causes of action against insurers.

The proposal recalls California’s experience following the landmark 1979 California Supreme Court decision in Royal Globe Insurance Co. v. Superior Court, which found that third-party claimants could bring direct actions alleging bad faith by insurers in settling contracts to which the claimant was not a party.

The predictable consequence of that ruling was seen almost immediately. Between 1980 and 1987, the number of auto liability claim filings in California’s Superior Courts increased by 82 percent and their severity grew by a factor of four. Personal injury lawsuits associated with auto claims doubled between 1982 and 1987, reaching a peak of 91,450 cases. Those trends rapidly reversed when the California Supreme Court overturned the Royal Globe decision in 1988.

Perhaps a more direct comparison can be found in Florida, which like New York employs a no-fault auto insurance system. In no-fault states, which rely primarily on personal injury protection (PIP) coverage, claims of bodily injury liability are intended to be rare. That is not the case in Florida, one of just five states that grants standing to third parties not named in the insurance contract to bring claims of bad faith against insurers.

A 2018 report by the Insurance Research Council shows how bodily injury claims took off in Florida following a 1993 decision that created third-party bad faith, and specifically how that claim frequency compares to the no-fault states of New York, New Jersey and Pennsylvania. 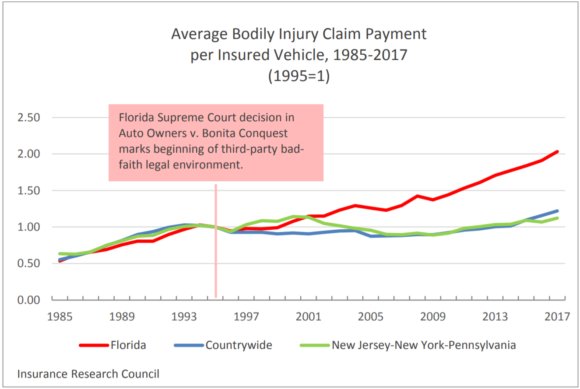 That difference in the rates of claims and lawsuits also show up clearly in the price of auto insurance. According to the most recent survey by Insure.com, Florida consumers now pay the third-highest auto insurance rates in the United States, with an average premium of $2,239. New York, by contrast, is 37th, with an average premium of $1,320. Should A.B. 5623 continue its path through the Assembly and be signed by Gov. Andrew Cuomo, New York should expect to rapidly climb the rankings.

The purpose of insurance is to indemnify the policyholder, to make them whole. It is not to provide enrichment for plaintiffs or their attorneys. New York lawmakers should learn the lessons of California and Florida and turn back before it is too late.