More than 21,500 fires have burned nearly 700,000 acres so far in 2014 (as of May 29, 2014), and these fires have been caused by both lightning strikes and more disturbingly, through a number of arson caused burns1. However, the most critical factor when evaluating wildfire risk is not how fires start or how many might occur, but rather the ability to identify the probability of wildfire risk for an individual property. There will always be homes constructed in rural, wildland areas, and the associated risk tends to be acknowledged by homeowners in those particular locations. However, the unprecedented expansion of urban areas over the past 50 years has greatly increased the opportunity for homes to be damaged by wildfire activity due to their location near high-wildfire-risk areas.

As cities grow in population, they tend to expand outward into formerly undeveloped wildland areas. Since much of the expansion on the urban edge consists of residential properties, an increasing number of newer homes are located in close proximity to natural wildland areas. The precise area where urban development and wildland meet and intermingle is commonly referred to as the Wildland-Urban Interface. 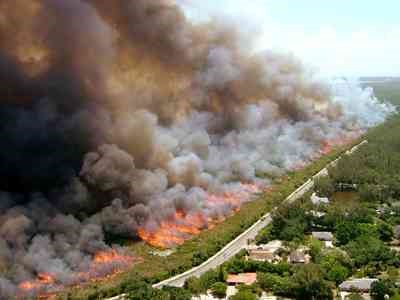 Identifying the Wildland-Urban Interface is essential to a comprehensive interpretation of wildfire risk. Wildfires most often originate in wildland areas, and therefore the only way to understand the risk to residential dwellings is to define where the wildland area comes into contact with a developed area. The interface provides a means of locating the intersection of potentially high-risk fire areas and large numbers of homes.

Approximately 40 percent of the 115 million single-family homes in the U.S. (as of 2008) are located within this area. Between the years of 1990 to 2008, there were close to 17 million new homes built in the U.S., of which 10 million were constructed in the Wildland-Urban Interface2. While most of these homes would be classified as Urban due to their location within an urban setting, there is a strong likelihood that many homes in the interface may have a higher wildfire risk due to their proximity to high-wildfire-risk zones beyond the urban boundary. To illustrate this point, consider that 97 percent of all wildfires are extinguished before they are 10 acres in size3. It would seem that this ability to extinguish most small fires would effectively reduce property loss, but a review of the number of structures lost to wildfire each year (Figure 1) suggests otherwise. In fact, the number of homes that have been destroyed in recent years has increased dramatically. An increase in residential development in the Wildland-Urban Interface is likely one of the factors responsible for this increase in homes lost to wildfire.

Figure 1: Average number of structures destroyed per year by wildfire, averaged by decade (except the 2000-2008 period which does not include the 2009 data). 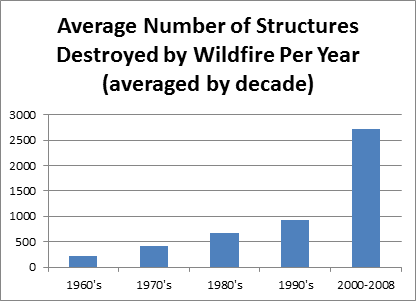 With the 2014 wildfire season well underway and total acreage burned climbing every day, homeowners and insurers across the United States, particularly in the western states, should be prepared for many more potentially active months. Understanding the level of risk and potential exposure to wildfire damage at the local level is particularly important not only for homeowners, but for insurers, lenders and servicers, investors, disaster response teams and many others. Wildfire risk data and analysis can support better underwriting, mortgage lending and other financial decisions, in addition to facilitating mitigation initiatives designed to minimize, and ideally, prevent massive property damage. The 2013 CoreLogic Wildfire Hazard Risk Report examines the residential properties potentially exposed to wildfire risk in 13 western states. This report provides a comprehensive evaluation of the total number of properties at each risk level, along with the estimated value of the single-family residences at risk in the region.