When assessing earthquake risk in Canada, many commonly refer to ‘The Big One’ that will eventually strike British Columbia (B.C.). But what exactly is ‘The Big One’? Understanding the various earthquakes that can occur, the unique hazards they pose, and the probability, all help to define ‘The Big One’. But it’s not just about B.C., as eastern Canada is also prone to earthquakes, and a significant earthquake there could therefore gain the title of the ‘The Big One’.

Natural Resources Canada locates approximately 4,000 earthquakes each year.1 Most of these are too small to cause damage, but several are still felt. In addition, every few decades, a damaging earthquake impacts Canada, and every few centuries, it experiences one of the largest earthquakes in the world. Figure 1 shows that nearly every province and territory in Canada has earthquakes, with the highest level of activity in B.C… There is also an active earthquake zone in eastern Canada along the St. Lawrence River Valley and across the territories in Canada’s arctic region.

These areas of high seismic activity intersect with highly populated urban centers, and host numerous residential, commercial and industrial properties. It is for these reason that they are of greatest concern to risk managers, and in Canada, encompass the key areas of southwestern B.C. and the southern regions of Ontario and Quebec.

Deep, intraslab earthquakes are most commonly located beneath the Strait of Georgia and south into Puget Sound, WA, and have a high recurrence frequency. The most recent damaging event was the 2001, magnitude 6.8 Nisqually earthquake south of Olympia. This event was widely felt and caused minor damage across southwestern B.C.3 Intraslab earthquakes commonly occur at depths between 50 and 80 km / 31 and 49 mi, and because of their depth, generally cause less severe damage locally. But, the resulting geographic footprint of distributed lower damage will be larger than a shallow earthquake of the same magnitude.

Historically, the Cascadia subduction zone has produced some of the world’s largest earthquakes. This megathrust fault extends from mid-Vancouver Island to northern California. Seismologists have determined that a full rupture of the megathrust fault has occurred about every 500 years4, with the most recent on January 26, 1700, a magnitude 9 event. The Cascadia subduction zone has an off-shore location, so the fault rupture and greatest shaking will occur away from urban areas. Nevertheless, megathrust earthquakes with several minutes of shaking, are rich in long-period but low-frequency energy, and this ground motion can still be damaging to tall structures hundreds of miles away, as observed in the 2010 magnitude 8.8 Maule, Chile and 2011 magnitude 9 Tohoku-oki Japan subduction earthquakes.

Eastern Canada is located in a stable continental region, and the level of earthquake activity is much less frequent than in the west. However, the region has experienced damaging earthquakes in the past and will again in the future. The largest earthquake in eastern Canada was the 1663 Charlevoix earthquake, which was between magnitude 7.3 and 7.9.5 More recently, the June 2010 (magnitude 5.4) and May 2013 (magnitude 5.2) earthquakes remind us that eastern Canada is seismically active. Seismic activity in stable continental regions is generally related to the regional compressive stress field, where earthquakes most commonly occur in the areas of inherited crustal weakness.

Damage Potential of ‘The Big One’

The earthquake risk in Canada is real and must be adequately prepared for, but what exactly is ‘The Big One’? There has always been attention on the Cascadia subduction earthquake, but is this earthquake really ‘The Big One’? If we only consider its magnitude, yes, but will it be the most damaging event to impact Canadian exposure? Likely not, as a shallow crustal earthquake directly beneath a major urban center like Vancouver or Montreal, could be catastrophically worse due to strong localized ground shaking in close proximity to these large cities. Furthermore, because of the built environment and higher vulnerability of structures in eastern Canada, even a moderate earthquake of magnitude 5.5 to 6.0 under the historic district of Montreal, could cause more damage than an event in B.C.

It is not a matter of if, but when another damaging earthquake will impact Canada. It could be many years before another megathrust earthquake along the Cascadia subduction zone, but it could be sooner too. And, the probability of a shallow crustal or deep intraslab event causing damage somewhere in Canada could be far more likely. It is therefore best to be equipped with an earthquake kit and plan, and adequate earthquake insurance, to help prepare for an earthquake’s far-reaching impact. 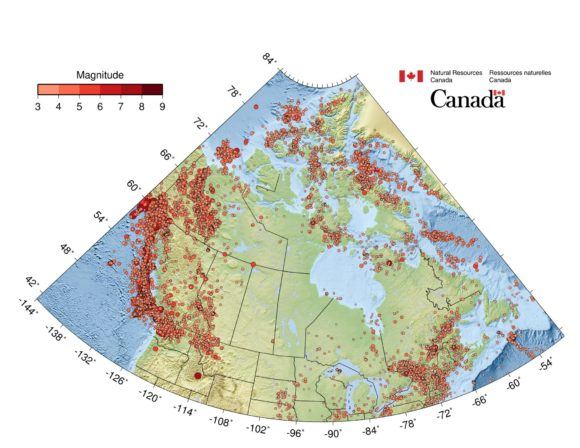