First on the Market

Ten years ago, CoreLogic® (at the time, EQECAT) introduced the use of global Atmosphere-Ocean-General-Circulation Models (AOGCM) for insurance-oriented assessments of windstorms in Europe. They were used for long, continuous simulations of past, present and future storm activity affecting properties around the world. Performed in collaboration with renowned universities, these simulations helped to reduce and better quantify the uncertainty associated with the modeling of insurance losses for this peril.

Flowing into the generation of more advanced stochastic event sets for the Eurowind™ model, these physically-based findings supplanted previous forms of assessment, for example, the classic expert opinion regarding probable maximum storm scenarios.

The advantage of climate model simulations lies in its length. The models are typically run for centuries. During this time all the components of the coupled Earth System, such as the atmosphere, ocean, ice, vegetation and atmospheric chemistry have enough time to interact with each other to produce physically sound results. They can simulate all types of oscillations and modes observed in our real climate and give indication of extreme, not yet observed storm scenarios.

As it continues to be refined and improved, AOGCMs are and will remain the most valuable and foundational tool we have at our disposal to better understand and manage scenarios leading to large socioeconomic and property losses.

Long climate model simulations produce a very large amount of data which is not directly actionable for the insurance industry. In Europe the raw AOGCM output is typically not available to commercial entities.

This situation highlighted the importance of collaboration between academic experts, the insurance industry and commercial developers of risk models. Such a collaboration was initiated by CoreLogic 10 years ago in response to this need, at first with the Free University of Berlin and later also the University of Birmingham. Both universities are renowned for their expertise in the area of applied European windstorm research, producing results directly applicable to insurance-oriented problems.

To supplant the expert opinion on storm scenarios beyond the historical 50-year mark to, say, the two hundred year level, CoreLogic created their first Hybrid Hazard in 2008. This was in response to the need for less uncertainty by companies trying to better understand their tail risk and manage the allocation of their reserves.

In this first Hybrid Hazard, the accuracy of measured gust wind speeds was complemented by the length and temporal homogeneity of an AOGCM simulation of the 1860-2000 European storm climate. The gust wind speed measurements were used for the compilation of high-resolution footprints of damaging historical storms of the last 50 years, the AOGCM simulations, performed with the ECHAM5* model, for the generation of the corresponding stochastic event set of Eurowind.

Analyzed and recalculated by the Free University of Berlin, the ECHAM5 output was converted to dozen storm variables directly useable by CoreLogic in their stochastic modelling of windstorms. The analysis allowed a substantially better portrayal of storms larger than those observed in the last 50 years. Furthermore, it also helped to identify the physical thresholds of extreme storms, provided information on clustering patterns, and narrowed the range of their frequency.

Near Term & Diversification of Risk

The storm climate goes through various oscillations and longer-term trends, and so do the related insurance losses. Lower mode, quasi-decadal oscillations are becoming increasingly apparent in European windstorm loss records of the past decades. Higher in the 1990s, lower in the past 10 years, these oscillations in losses are a prime discussion topic within the insurance industry nowadays.

These fluctuations are assumed to be partially driven by slow oceanic processes. CoreLogic dedicated a further collaborative phase with the universities to this topic with the ultimate goal of an improved multi-year predictability of storm activity impacting multi-year industry transactions such as the insurance-linked securities market.

Their initial findings based on a coupled ECHAM5-MPIOM** model indicated that the European storm season tends to be preceded and furthered by a more active overturning in the Atlantic Ocean. Further advances in this area are expected to come from the evaluation of near-term European storm climate simulations using very high-resolution climate models. This was part of a CoreLogic-supported application for a project at the Barcelona Supercomputing Center.

Better allocation of capital resources is important from both near-term, as well as longer term perspective. CoreLogic investigations aimed at a longer time horizon gave further insights into potential future activity of severe European storms at the end of the 21st century. Converted to a What-If Eurowind loss scenario, they have indicated that the projected doubling of the frequency of Daria-like storms could entail an approximate ten percent increase in European market losses at the end of the century.

All these investigations are performed with the aim of providing CoreLogic clients with better and most-up-to-date risk management guidance. In this sense, the Europe basin based investigations are currently being extended to include correlations with Atlantic Hurricanes. This to provide a real potential benefit for insurance companies seeking to diversify their risk pertaining to both tropical and extratropical storms.

Better understanding of the variability of storm activity is one of the most cited topics of interest in European insurance circles dealing with property losses due to this peril. To be able to provide their clients with a guidance on this issue in their second version of the Hybrid Hazard (incorporated in the most recent Eurowind model) CoreLogic replaced the 140-year long AOGCM run with the so-called Millennium simulation. In addition to that have they enhanced Eurowind stochastic events set with additional storms physically downscaled from the same source.

The Millennium simulation is a 1200-year long global run of an Earth System Model. It continuously covers the historical period 800-2000 and is driven by real historical forcing, as best known. Besides contributing to a statistically more robust stochastic event set and being a basis for regional downscaling, it has the advantage of containing hundreds of low-frequency climatic cycles.

Some of these cycles, such as the North Atlantic Oscillation (NAO), a seesaw between the subtropical High and polar Low-pressure systems over the North Atlantic Ocean and Europe, are known to have significant influence on the activity of extra-tropical storms over Europe.***

With the release of RQE® v.18, this option is an integral part of the Eurowind model and at direct disposal to clients. It gives the users the opportunity to test the performance of their portfolios under specific phases of storm activity and thus help with allocation of reserves at regional level.

Since the introduction to the area of insurance-oriented catastrophe risk modelling 10 years ago, AOGCMs have become an integral part of many probabilistic windstorm risk models. CoreLogic was and continues to be a pioneer of this approach. By collaborating extensively with the academic sector, CoreLogic persists in seeking to provide the most up-to-date, applied catastrophe modelling solutions for the insurance sector.

* The name ECHAM5 fuses the “EC” (from the European Centre for Medium Range Weather Forecast model) with the “HAM”, for Hamburg, namely the Max Planck Institute of Meteorology, where the former model has been substantially extended.

*** The strength of the NAO is expressed in the form of the NAO Index, which is based on the pressure anomaly differences between the northern and southern parts of the North Atlantic Ocean. When the index is positive (positive phase of the NAO) the storms activity over Europe tends to strengthen and the storm tracks tend to be shifted towards the north. The circulation tends to weaken and storms tracks tend to be located further south during the negative phase of the NAO. 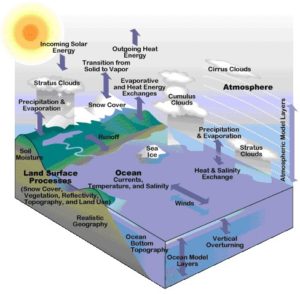 Dr. Kuhnel is holder of postgraduate degrees from Swiss and Australian universities with more than 25 years of professional experience. Having worked for various commercial and academic organizations on different continents he gained expertise in the development of innovative risk assessment tools. Senior member of the CoreLogic Paris Model Development team for the past thirteen years he helps clients to better understand their exposure to natural perils.