During the first full week of May, Houston was devastated by catastrophic flooding and hail. Defining the southern edge of a large weather front on May 9 across the U.S. Southeast, severe thunderstorms forecasted for Houston delivered hailstorms in many neighborhoods.

Still, Texas is no stranger to catastrophic weather and climatological events.

In 2015 on Memorial Day, Houston was inundated with a foot of rainfall. Two years later, and Hurricane Harvey stalled out, causing massive amounts of rainfall induced flooding. The storm put the 7 million population metro area under water, concrete-laden streets becoming bonafide rivers. CoreLogic® found that 70% of the flood damage from the hurricane was uninsured.

In 2018, in the early morning hours of June 6, baseball sized hail struck the middle of the Dallas-Fort Worth metro area, causing damage upwards of $1 billion, making it the third costliest hailstorm in Texas History.

From hail alone during this May 2019 event, Reactor™ from CoreLogic estimated that more than 50,000 homes were exposed to golf ball-sized hail or greater, causing damage to roofs in a region already beset by heavy rainfall and localized flooding.

May 9 Hail Activity in Houston Shown in Reactor

More than 12″ of rainfall in some areas over the course of a week have led to widespread flash-flooding in low-lying areas. 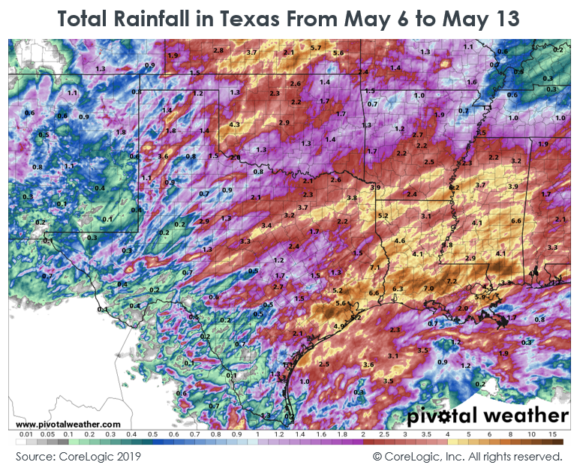 Weather radars can observe the whole storm, but different combinations of rain and hail sizes can look identical. The proprietary hail verification science from CoreLogic enables a better estimate of the effects of the damaging hail.