In what counts as excellent news both for Florida taxpayers and the private insurance market, Gov. Rick Scott and the State Board of Administration have approved a request from the Florida Hurricane Catastrophe Fund to explore transferring up to $2.2 billion in risk back to the private market.

The board’s trustees – comprised of Scott,Chief Financial Officer Jeff Atwater and Attorney General Pam Bondi — gave Cat Fund CEO Jack Nicholson authority to hire a broker and test the waters for what would be the Cat Fund’s first retrocessional plan. The deal could include a combination of traditional and collateral reinsurance, catastrophe bonds and other insurance-linked securities. However, any final deal would still need the board’s formal sign-off, likely at its next meeting April 14.

The approval was welcomed by the Stronger Safer Florida coalition, of which R Street is a member, which issued the following statement:

Stronger Safer Florida commends the State Board of Administration for authorizing the Florida Hurricane Catastrophe Fund to seek opportunities to transfer risk away from Floridians and onto the global private reinsurance market. If attractive reinsurance rates exist for Florida, it would be wise for the Cat Fund to act so policyholders are less likely to face hurricane taxes in the event of a future hurricane.

The Cat Fund’s proposal follows similar moves by Florida’s other state-run insurance entity, Citizens Property Insurance Corp., which recently announced it is projected to drop to its lowest policy count since it was first created (through the merging of the state’s FAIR plan and coastal pool) in 2002.

Previously reliant almost entirely on the Cat Fund for reinsurance coverage, Citizens has looked to take advantage of attractive market conditions with a significant move toward private reinsurance in recent years. Citizens had $3.1 billion of private coverage in place during the 2014 hurricane season, including the $1.5 billion Everglades Re catastrophe bond, the largest cat-bond issuance in history.

It’s thus a natural fit for the Cat Fund to explore similar territory, particularly since projections show private risk transfer would have either negligible effects on property insurance rates, or at worst, rate increases of less than 1 percent. However, when the Cat Fund previously floated the idea of $1.5 billion in risk transfer last year, the SBA shot that notion down.

The board’s tentative approval came over the objections of some coastal politicians, notably state Rep. Frank Artiles, R-Miami, who stretched credulity in making the case that moving risk back into the private market constituted “corporate welfare.”

The proposed transfer of billions in risk from the Florida Hurricane Catastrophe Fund to the private offshore global reinsurance market is nothing more than corporate welfare and would mean higher property insurance rates for Floridians. If CAT Fund Chief Operating Officer Jack Nicholson is permitted to gift $2 billion into the private re-insurance market, the only beneficiaries would be the reinsurers themselves, mostly based in Bermuda.

It would be difficult to overstate just how backward this is. The existence of the Cat Fund itself is the clear corporate welfare in this case, as it is intended to provide coverage to primary insurers at rates below those charged in the private reinsurance market through use of state-granted bonding and assessment authority to finance losses after they’ve occurred.

It’s also clear from his comments that Mr. Artiles has some difficulties understanding the very concept of insurance. The beneficiaries of risk transfer are the people who otherwise would shoulder the burden of that risk – in this case, taxpayers and policyholders throughout the state, who only this month finally finished paying off the hurricane taxes from the 2004 and 2005 seasons. Bermuda reinsurers are no more the beneficiaries of this change than any insurers writing any business anywhere. They’re taking on risk. Whether that risk proves to be fortuitous is something only time will tell. The opportunity to trade a potential large loss for a small but certain one is the reason we buy insurance in the first place.

Of course, given conditions in the ongoing soft market for North American property catastrophe

reinsurance, reports indicate that private cover is now actually priced more attractively than even the Cat Fund, prompting some Florida insurers to explore ways to replace Cat Fund coverage with cessions to the private market. Most recently, Heritage P&C announced plans to issue a $150 million cat bond, largely to replace Cat Fund coverage. Keefe, Bruyette & Woods analysts Meyer Shields and William Hawkins project as much as a quarter of the Cat Fund’s $17 billion in coverage ultimately could be replaced with private cover.

SBA Executive Director Ash Williams also this week separately (and, in our view, wisely) rejected a suggestion by Investment Advisory Council Vice Chairman Chuck Cobb that the fund should divert its $13 billion in assets into potentially higher-return – but also higher risk and less liquid – investments. The Cat Fund’s allocations currently largely sit in cash or short-term high-quality instruments. They earned returns of 0.18 percent over the past year an annualized 1.74 percent over the past decade, beating custom benchmarks of 0.03 percent and 1.66 percent, respectively.

The reason for the fund’s allocation “is, if nature goes the wrong way and we get a real blow and we need that money, we’re going to need it then and we’re going to need all of it, not have it tied up somewhere,” Mr. Williams said at the Dec. 8 meeting, according to its minutes. 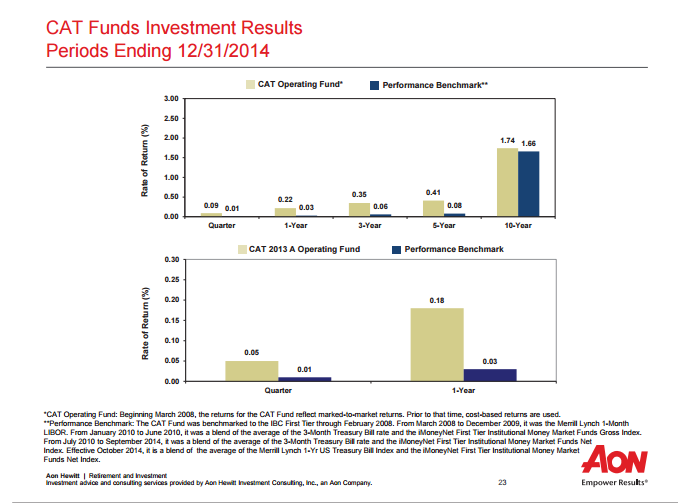