Tornadoes, hailstorms and fires took their toll on Texas last year with insured losses well over $3 billion, according to an insurer trade group

The state had more than three times as many claims and almost three times the dollar amount in losses as the next highest ranked states, the Insurance Council of Texas reported.

The numbers don’t include flood losses, which were in the hundreds of millions of dollars, according to Mark Hanna, a spokesman for the ICT.

The 2015 estimated insured losses were prepared by the Property Claim Services (PCS), which monitors all states’ insured losses, including homeowner, commercial property and auto insurance, from catastrophic weather events. 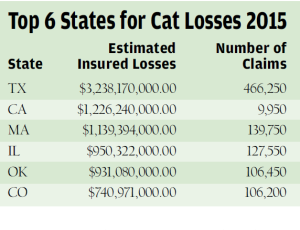 Other high ranking states include Massachusetts with $1.1 billion, followed by Illinois, Oklahoma and Colorado.

Texas had 466,250 claims from catastrophic weather events as compared to the next highest state, Massachusetts, which had 139,750 claims.

Other high ranking states in terms of cat losses include Illinois, Oklahoma and Colorado.

Despite the above reported insured catastrophe losses, 2015 was a relatively quiet year for natural hazard events across the United States, according to property data provider CoreLogic.

Its annual Natural Hazard Risk Summary and Analysis, released in late January, shows that the United States in 2015 was average or slightly below average in terms of natural hazard events, compared with previous years.