A new poll conducted by a Seattle, Wash.-based carrier that asked independent insurance agents what’s ahead in 2020 showed that roughly half of agents expect technology disruption to have a minor impact on their agency over the next few years.

Safeco Insurance’s Agent for the Future survey asked 600 independent agents what trends they believe will have the most impact on their business by 2020 and what they are doing today to prepare for tomorrow.

“Consumers are changing how they live, learn and buy in a digital-first world,” Tyler Asher, president of Safeco Insurance, said in a statement. “This transformation has made it necessary for carriers and agents alike to adapt to these new trends.” 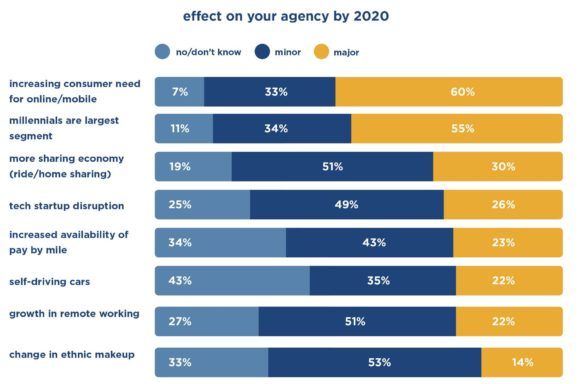 Safeco Insurance polled 600 independent agents across the U.S. and asked what they expect to effect their agency in the next few years.

The majority of agents (60 percent) responded that they expect an increasing consumer need for online/mobile to have a major effect on their agency by 2020, while just over 30 percent say they expect a minor impact.

Just under half (49 percent) said they expect tech disruption to have a major impact, while the rest were split between saying it would have only a minor impact and that they didn’t know.

The poll shows that although agents recognize the importance of online services, the majority of them are not fully comfortable with customers accessing online account management tools. Only 40 percent said they are comfortable, while 38 percent answered they are “somewhat comfortable,” and a combined 22 percent were either not comfortable or do not want to offer it, the poll shows.

The Safeco poll asked how the roles of customer service representatives and producers might be evolving.

Those surveyed said that they see the responsibilities of producers and CSRs merging into an account executive or account manager role. Agents reported that 37 percent of CSRs write a lot of new business and that 43 percent of producers provide a lot of service to their customers. This trend appears to be consistent regardless of the size of an agency, the poll shows.

More than half of the agents surveyed indicated their agency has hired new producers, service and support staff in the past two years.

The survey among 600 independent agents was conducted online in April and May throughout U.S. Respondents for this survey were selected from among those who have volunteered to participate in online surveys.