Those of us in California don’t blink when we feel a tremor. But when a big earthquake strikes, people ask questions: Was it the “Big One”? Is the “Big One” coming soon?

Such were the questions after July 4, when a 6.4 moment magnitude earthquake struck Ridgecrest, Calif., followed closely by a 7.1MW event and over 8,900 aftershocks as of July 12.

Ridgecrest was not the “Big One.” While it was the most powerful California earthquake since 1999, and only the fourth exceeding 7MW in the past 40 years in California, Ridgecrest occurred in sparsely populated Kern County and won’t rival the state’s most destructive earthquakes.

The U.S. Geological Survey raised the risk of another high magnitude earthquake shortly following the Ridgecrest event, but the chance of a major aftershock decreases each day. Nevertheless, we are hopeful that Ridgecrest will prompt Californians to consider their exposure to earthquakes, and take action to protect their families and assets.

For starters, earthquake kits are an inexpensive necessity for Californians to be prepared. Structural retrofits are another way Californians can fortify their homes, especially in places like the San Francisco Bay Area and Greater Los Angeles, where many homes were built before 1980, an era in which homes were not built to the same seismic specifications as today.

These measures provide invaluable protection, but there’s another that most Californians lack — insurance. Coverage for earthquakes isn’t provided by homeowners policies in California, and the lack of it poses a risk to the largest assets of many state residents: their homes.

A primer on earthquake insurance in California

Today, earthquake insurance is primarily purchased through the California Earthquake Authority, an association sanctioned by law that insurers formed after Northridge. Since the 1980s, California law has required that earthquake coverage be offered with homeowners polices. After the destruction caused by Northridge, many homeowners insurers reduced their exposure to earthquake and stopped writing new homeowners business entirely, leading to major disruption in the insurance market. The CEA was formed so homeowners insurance could be sold along with the mandatory offer of earthquake coverage, without individual insurers bearing the catastrophe exposure.

The CEA writes over 1 million earthquake policies annually. That seems like a large number until compared against California’s 14 million housing units. Combined with only half-a-million policies insured by the private market, a meager 10 percent of residential units in the state possess earthquake insurance.

One reason for the low participation rate is simply the cost. Earthquake premiums are generally intended to match the risk, so those in risky areas won’t find it cheap; according to United Policyholders, annual earthquake premiums in San Francisco, through which the San Andreas Fault runs, ranges from $2,000 to $5,000 for a 1,400-square-foot home. Nevertheless, the protection may be worth the price.

What is the actual risk?

Shaking potential was based on a study by the California Geological Survey and the USGS, insurance participation rates were provided by the California Department of Insurance, and the locations of residences were obtained from Milliman’s “market basket,” a cross-sectional data set that we use to represent housing stock and estimate its exposure to catastrophic perils.

Though it experienced one of the most powerful earthquakes in state history, the Ridgecrest epicenter wasn’t particularly exposed.

If an earthquake similar to Ridgecrest occurred near a more populated area, as it clearly could, households without insurance could be left without much besides the rubble where their homes used to stand.

Additionally, it might be presumptuous to expect significant federal help for these households. With the culmination of the costs of reconstruction, additional living expenses, and outstanding mortgages, uninsured homeowners could be forced into foreclosure, and ultimately forfeit years of accumulated home equity. With nearly 90 percent of housing units statewide without earthquake insurance, Californians may want to ask the real question: Are we ready for the “Big One”? 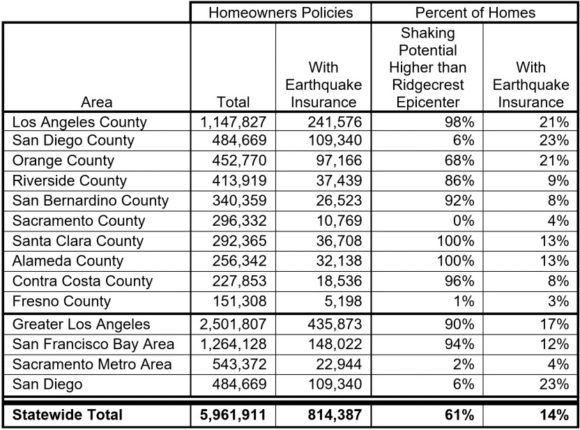 Aromatherapy Spray From India Linked to U.S. Deaths Being Recalled

EXOR Restarts Talks With Insurer Covéa Over Scrapped $9B Sale of PartnerRe: Report