Quick-moving Tropical Storm Fay strengthened as it moved toward southern New Jersey, where it was expected to make landfall Friday afternoon before sweeping north to New York with a curtain of heavy rain and thrashing winds.

Rain will spread across the mid-Atlantic and winds should start to rise in New York about 2 p.m., the National Hurricane Center said. The system has prompted tropical storm warnings from Fenwick Island, Delaware, to Watch Hill, Rhode Island, including New York and Long Island, the first in many of those areas since Superstorm Sandy struck in 2012.

Fay’s top winds reached 60 miles (97 kilometers) per hour, up from 50 mph earlier, as it churned about 170 miles south of New York, the hurricane center said in an 11 a.m. advisory. 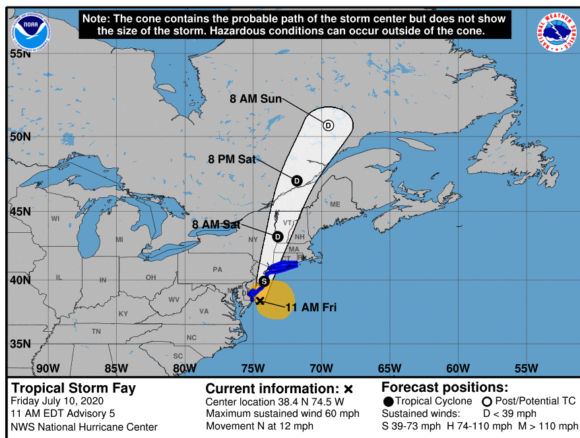 “The main impacts will be the heavy rain and flooding across the mid-Atlantic, particularly New Jersey and southern New York,” said Rob Miller, a meteorologist with AccuWeather Inc. in State College, Pennsylvania. “It is a fairly quick-moving system and things should start improving rapidly tonight and tomorrow.”

Flash flooding of streets and low-lying areas is likely as 4 inches of rain gets wrung out from the storm, with some isolated spots getting as much as 7 inches. The strongest winds will be east of the storm moving across Long Island and southern New England, tearing down tree branches, probably causing some power outages and possibly touching off some minor tornadoes in a region that usually doesn’t get many of those destructive storms. There could also be some minor storm surge flooding along exposed coastal areas.

The storm probably won’t get much stronger before it makes landfall near Atlantic City, New Jersey, between 3 p.m. and 5 p.m. and passes over New York from 10 p.m. to 1 a.m., Miller said. After its center moves over land it will begin to weaken, and by Sunday it will have faded away. Its winds would need to reach 74 mph to be classified a hurricane.

Fay will be the third storm to hit the U.S. in 2020 and the sixth system in the Atlantic named so far this year, a record for this point in the hurricane season.

While storms that hit in the Gulf of Mexico tend to crimp oil and natural gas supply, often sending prices higher, Fay will likely decrease demand because of power outages and slightly cooler conditions due to cloud cover, said Jim Rouiller, lead meteorologist at the Energy Weather Group LLC.

Top photo: A pedestrian carrying an umbrella while passing in front of the Empire State Building is reflected in a puddle in New York, U.S., on Friday, Jan. 3, 2020. Photographer: Michael Nagle/Bloomberg