When Mark McCurdy informed Maryland Auto Insurance’s Board of Trustees in July 2019 of his intention to retire this year, he never imagined that the few months ahead of his retirement would involve leading the organization through a global pandemic.

The impact of the COVID-19 crisis, for which the first case was confirmed in the United States back in January, has since been felt across every U.S. state with Maryland being no exception. The state has so far seen more than 75,000 confirmed cases and more than 3,000 confirmed deaths.

“Maryland auto policyholders, because they are disproportionately the working poor, have been really hurt by the pandemic,” McCurdy told Insurance Journal. “People have lost their jobs, losing their jobs is going to impact their credit and losing their credit is going to impact their ability to get insurance when they finally do get back to work.”

Maryland Auto Insurance is an independent agency of the state that provides automobile liability insurance to Maryland residents who are unable to obtain automobile insurance in the private market. The agency’s mission is to reduce the number of uninsured motorists in the state.

McCurdy said Maryland Auto has never used credit as a rating factor, and as a result, he believes it has an important role to play in getting people back on their “insurance feet” after this crisis has taken its toll.

“If people have been canceled by their carriers or no longer qualify because they’ve had a loss of coverage, and in that time, have had a diminution of their credit, we’re going to be here for that group,” he said. “That’s really going to be an important legacy of the pandemic is how we work to heal the economic wounds that have been put on people through no fault of their own.”

McCurdy has his share of experience tackling challenges at Maryland Auto. When he first stepped up to the role of executive director in 2015, he says the organization was facing a difficult time on the back of a shift in the private auto insurance industry’s ability to underwrite high-risk drivers.

“We were in sort of a perilous time,” he said. “I felt like it was our job to restore Maryland Auto to the strengths that it had throughout its history.”

Under McCurdy’s leadership, the company relocated from Annapolis to its current headquarters in Baltimore and executed a corporate-wide rebrand. He worked on legislative and organizational initiatives designed to educate insurance laws and empower Maryland drivers to comply with those laws, according to a company press release. He also led efforts to stabilize and reverse the organization’s financials from declining surplus to seeing a surplus growth for the first time in nearly 10 years, according to Maryland Auto Insurance Board of Trustees Chairman Robert McKinney in the release. 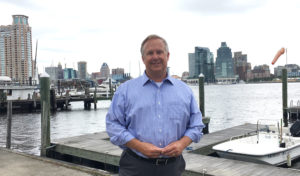 “What are the keys to success? Whether it’s in defending a lawsuit or advancing legislation, the real key is to be the voices of people who can’t be heard and to always see the world through the prism of public policy.”

-Former Maryland Auto Executive Director Mark McCurdy reflected on his 38-year career in public service, in which 10 years were spent working with Maryland Auto Insurance. McCurdy retired from his position as executive director of Maryland Auto on July 1, after spending the past five years leading the organization through a transformation.

“I really am proud of the way that we have worked together to learn and to educate the whole body of government about the direct relationship between the work of Maryland Auto and economic development needs in this state,” McCurdy said.

Indeed, he said the key to Maryland Auto’s transformation in the last five years was understanding the role the organization plays in the state’s auto insurance industry.

“What gets people to work in Maryland is a car, and what gets people in their car is insurance. So many people, we believe almost 500,000 Marylanders, can’t legally get to work because they don’t have automobile insurance,” he said. “We’ve always been there for the person who has been disadvantaged by life, not often by their driving record, but often by their poverty level. I think understanding the role that we play and then thinking about how we can do better at it has been transformative in these last few years.”

In 2019, he said, he realized the time had finally come to pass the torch.

“I really felt in 2019 that mission, which was hard, had finally been completed,” he said. “I was really thinking it was the right time to make the change. The damage had been repaired, the company was doing well and the next stage should be in somebody else’s hands.”

That person turned out to be former Maryland Insurance Commissioner Al Redmer Jr., who resigned from his position as insurance commissioner in the state to join Maryland Auto as executive director in May.

“Al has got this tremendously strong leadership style,” McCurdy said. “He’s really very much a caring person, and I think that what he’ll do well is take that style and not only use it to lead the organization, but also to help producers help people who need insurance get back on the road, as we like to say.”

In terms of continuing to lead the organization through the unprecedented challenges presented by the ongoing pandemic, McCurdy said Redmer is equipped to handle that, too.

“Al’s strengths will be his ability to continue to lead Maryland Auto while appealing to and assisting producers in this post-COVID circumstance that we have,” McCurdy added.

Outside of McCurdy’s tenure at Maryland Auto, which began 28 years ago when he was assigned to the organization as general counsel during his time working with the Maryland Attorney General’s Office, he has a 38-year career in public service. As he reflects on his experience serving in both state government and the insurance industry and prepares for his next chapter in retirement, McCurdy said one important lesson throughout his career has been to always keep an eye on public policy.