There’s a new surprise member of the world’s safest cities club. Washington, D.C. has entered the top 10 in the Safe Cities index for the first time, while Hong Kong is a noticeable no-show after plummeting down the rankings.

Tokyo took the No. 1 spot in the Economist Intelligence Unit’s ranking for the third time running, while Singapore and Osaka maintained their respective footholds in second and third place. Hong Kong dropped to 20th place from 9th in the 2017 edition of the biennial report.

Asia-Pacific cities dominated the top 10, with Sydney, Seoul, and Melbourne bringing the region’s total to six spots. Amsterdam, Copenhagen and Toronto rounded out the top of the list. London and New York both leaped six spots, to take 14th and 15th place.

“Overall, while wealth is among the most important determinants of safety, the levels of transparency — and governance — correlate as closely as income with index scores,” said Naka Kondo, the editor of the latest Safe Cities report. “The research also highlights how different types of safety are thoroughly intertwined — that it is rare to find a city with very good results in one safety pillar and lagging in others.” 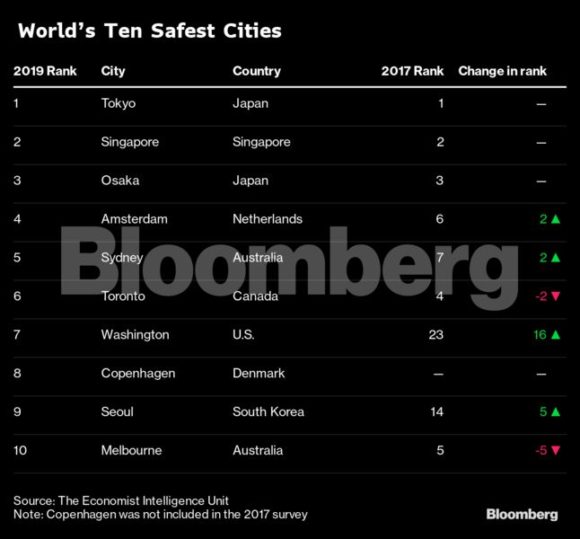 Numbers alone rarely tell the full story, and the report’s authors point out a couple of issues to note. Washington, D.C.’s catapult up into the top 10 — the U.S. capital came in at No. 23 in the last report — is in large part due to changes in the data used to compile the index. And the top 24 cities in the ranking in fact achieved very similar overall scores. From Europe, that list includes Paris, Frankfurt, Zurich and Stockholm; among the U.S. cities that made the cut were San Francisco, Los Angeles and Dallas.

While Asia-Pacific is home to several of the world’s safest places, it also contains some of the index’s lowest-scoring cities. Yangon in Myanmar took 58th place; Pakistan’s Karachi came in 57th and Dhaka, Bangladesh, filled the 56th spot. The Indian city of New Delhi came in at No. 53.

The region also performed less well on digital security than other factors.

“APAC cities perform well across the categories of health security, infrastructure security and personal security, but their North American counterparts generally fare better in digital security, accounting for seven of the top ten cities in this category,” Kondo said.