Cyber-attacks are named as the leading risk for business executives in the United States, Canada and Europe, according to a survey of business leaders published by the World Economic Forum, in partnership with Zurich Insurance Group and Marsh & McLennan Cos.

Globally, three of the top five risks are economic-related, with “fiscal crises” identified as the leading risk to doing business at a global scale, while “unemployment or underemployment” came in third and “energy price shock” ranked fourth.

These risks have strong links to social disruption and contribute to “failure of national governance” ranking fifth and “profound social instability” ranking sixth, said WEF in a statement accompanying the survey report.

The survey report, which is titled “Regional Risks for Doing Business 2019,” further breaks down the concerns of business executives into regions. Cyber-attacks are the second biggest challenge for executives overall, and the most important one for European and North American businesses for the second year in a row. (The WEF piloted its first regional risks report in 2018, which was designed to show how global risks are experienced differently by region. See table below, for a list of this year’s overall findings).

Environmental-related risks are the top concerns in South Asia and in East Asia and the Pacific, with both regions having suffered devastating natural disasters and extreme weather events, said the survey report. Social challenges rank high in Eurasia, affected by economic slowdown, and Latin America and in the Caribbean, where governments are still aiming to deliver critical social services.

In the Middle East and North Africa “energy price shock” leads the list of concerns due to ongoing price and production volatility, and in sub-Saharan Africa, where youth unemployment is more than 13%, executives are worried by their economies’ inability to create jobs, indicated the report.

John Drzik, president of Global Risk and Digital at Marsh, said: “Cyber-security remains the most concerning risk to business leaders in advanced economies, and growing technology dependence for many businesses will only amplify this. Combined with fractious geopolitical developments, and growing economic concerns, executives face a very challenging portfolio of potential threats. Business leaders should reevaluate their underlying view of the global risk environment and make greater efforts to strengthen their corporate agility and resilience.”

“There is a real existential threat to businesses worldwide,” said Eugenie Molyneux, chief risk officer Commercial Insurance, Zurich Insurance Group. “Executives are concerned that governments have too much debt to be able to afford measures that could help avoid a recession, and see cyber-attacks as the number one risk in 16 economies representing over 40% of the world’s GDP. At the same time, businesses are not even factoring in the impact of climate change over the next decade. These three risks need urgent action.”

Tulsi Naidu, chief executive of Zurich UK, said, the survey reveals that cyber-attacks are the most pressing risk for CEOs of the four largest EU economies — Germany, France, Italy and the UK — while data theft is ranked sixth across Europe. “While organizations are increasingly alert to the impact cyber-attacks can have, many do not yet fully appreciate the dangers, and must step up their efforts to combat the threat. As such, this is an area of insurance we expect to see grow,” she added.

“At a time when global economic growth appears fragile, business leaders are deeply concerned by their governments’ fiscal resilience. Meanwhile, cyber-threats remain a major risk due to their rapid evolution and increasingly disruptive potential,” said Emilio Granados-Franco, head of Global Risks and Geopolitical Agenda at the World Economic Forum.

“But in examining risk at the regional level, we also see various, interconnected drivers shaping diverse risks landscapes,” Granados-Franco went on to say. “Only by addressing economic risks and societal, technological, and environmental risks in an integrated manner, can stakeholders truly build resiliency.”

The findings of the “Regional Risks for Doing Business 2019” survey report are based on 12,897 responses from executives in 133 economies. Respondents were asked to select “the five global risks that you believe to be of most concern for doing business in your country within the next 10 years.” The latest edition of the survey was carried out from January to April 2019. Business leaders were asked to choose up to five risks from a list of 30, which included terrorist attacks, extreme weather events and state collapse or crisis. 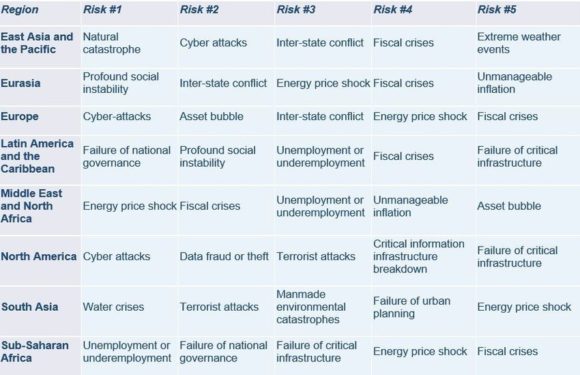