Australia banned a traveler from visiting for three years after she failed to declare her suitcase was loaded with food, including products that risk introducing a pig-killing virus.

The 44-year-old woman, who arrived at Sydney airport Saturday, was sent back to Vietnam. She had 10 kilograms (22 pounds) of food in her suitcase, including cooked pigmeat, Agriculture Minister Bridget McKenzie said. All 63 provinces and cities in Vietnam, including Hanoi and Ho Chi Minh City, have reported outbreaks of deadly African swine fever, leading to the culling of more than 5.4 million pigs.

For the first time my #biosecurity officers and ABF have cancelled a visitor’s visa for lying about concealed food in her luggage, including 4.5kg of pork-in the midst of a global #ASF outbreak. #biosecuritymatters #threatisreal #dontbesorrydeclareit @DeptAgNews @Australian_Pork

The travel ban reflects growing concern that the virus, which has spread to a new country in Asia virtually every month this year, could spread in Australia if it’s brought into the country in smuggled food that’s consumed by farmed or feral pigs. Customs officials report a three-fold increase in the incidence of the virus in clandestine pork products from international arrivals.

The 22.5 million passengers arriving in the nation each year, along with mailed parcels, are causing “an increasing risk of incursion, and that’s why we’ve had to step up our detections,” McKenzie told reporters in Canberra Tuesday.

The incidence of African swine fever contamination has climbed to almost half from 15% over an eight-month period in which 27 metric tons of cooked pork products were discovered by Australian Customs, she said.

The global pig industry has been roiled by the hemorrhagic virus, which isn’t known to harm humans. Since arriving in the former Soviet republic of Georgia in 2007, it spread through Europe and then to China, where it touched off the largest animal disease outbreak on record in August last year. 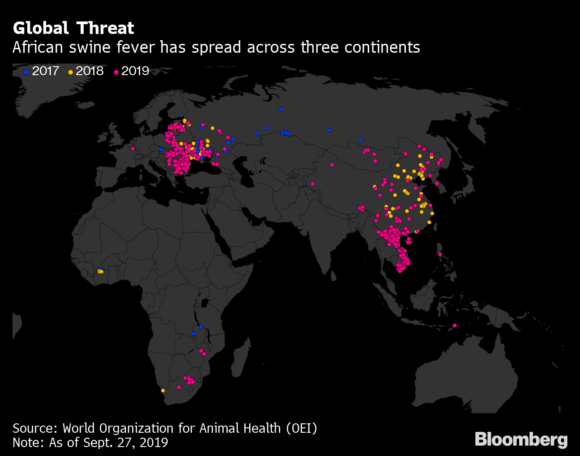 South Korea is sending military snipers and civilian hunters to its northern border to eliminate wayward, contagion-carrying pigs from Kim Jong Un’s reclusive neighboring state, where unofficial reports indicate the disease is spreading out of control.

Australia exports about 360,000 tons of pigmeat a year from about 2,700 hog farms, with less than 10% exported to markets including Singapore and Hong Kong, according to industry data.