Indonesian investigators found sweeping problems and missteps in connection with last year’s fatal Lion Air crash, including design flaws in Boeing Co.’s 737 Max jet, certification failures by the U.S. regulator and a raft of errors at the airline by pilots and mechanics.

In a much-anticipated report released Friday, the National Transportation Safety Committee listed its findings and recommended fixes to Boeing, Lion Air and aviation authorities in the U.S. and Indonesia. The findings focused on a flight-control feature called the Maneuvering Characteristics Augmentation System, which has also been implicated in an Ethiopian Airlines crash in March. But it also painted a damning picture of Lion Air, where numerous actions also helped lead to the tragedy.

The conclusions add to the pressures on Boeing, which is finalizing fixes to its grounded best-selling jet and attempting to manage a public-relations crisis that has cost the company billions of dollars. While this closes one chapter on the saga, it’s not over. Boeing Chief Executive Officer Dennis Muilenburg, who was stripped of his role as chairman earlier this month, is due to face questions from lawmakers in Washington next week.

The wide-ranging report found ample blame to go around, from an obscure repair station in Florida to Boeing and the U.S. Federal Aviation Administration, whose failures have undermined the agency’s credibility as a leading aviation regulator.

The 737 Max was grounded March 13, three days after the crash in Ethiopia, costing Boeing $9.2 billion and counting. While Boeing says it has made significant progress in returning the 737 Max to service, no date has been set.

In response to the findings, Muilenburg said the company is addressing the Indonesian investigator’s safety recommendations. Boeing engineers have been working with the FAA and other regulators to make software updates and other changes, according to the statement.

The FAA said it welcomed the recommendations from Indonesia and would carefully consider them in its review of the 737 Max. “The aircraft will return to service only after the FAA determines it is safe,” the agency said in an emailed statement. Lion Air said in a statement it’s “essential to determine the root cause and contributing factors to the accident and take immediate corrective actions to ensure that an accident like this one never happens again.”

Separately, the FAA on Friday revoked the repair station certificate for Miramar, Fla.-based Xtra Aerospace LLC, which repaired the sensor that was later installed in the jet and malfunctioned, triggering MCAS.

The sensor was miscalibrated when it was refurbished at Xtra’s facility, the report said. It was supposed to be checked after it was installed on the plane, but investigators said that the problem went undetected by the airline mechanic.

“We have been cooperating closely with the FAA throughout its investigation and though we have reached a settlement with the FAA, we respectfully disagree with the agency’s findings,” Xtra said in a statement. The FAA’s enforcement action was separate from the Indonesian investigation “and is not an indication that Xtra was responsible for the accident,” the company said.

Minutes after taking off from Jakarta for Pangkal Pinang on the morning of Oct. 29, Lion Air Flight 610 nosedived into the Java Sea, killing all 189 people on board. It was the second-deadliest airline disaster in Indonesia’s aviation history, following a 1997 crash near Medan that killed 234 people.

During testing, Boeing determined that malfunctions involving MCAS weren’t deemed serious enough — hazardous or catastrophic failures — for a more rigorous analysis, which could have identified significant problems with its design, according to the report. Boeing also erroneously assumed that the crew would be able to correctly deal with malfunctions within three seconds, even though they were unaware of the existence of the flight-control system, it said.

“The flight crew should have been made aware of MCAS which would have provided them with awareness of the system and increase their chances of being able to mitigate the consequences,” the report said. “Training would have supported the recognition of abnormal situations and appropriate flight crew action.”

During simulator testing, Boeing never considered the scenario that occurred in the Lion Air flight, in which the flight-control system kicked in multiple times and repeatedly pushed down the plane. The Lion Air crew reacted differently to what Boeing anticipated, according to the report.

Indonesian investigators also highlighted some problems in the certification process of the 737 Max, saying the aircraft manufacturer didn’t submit required documentation and the FAA didn’t adequately oversee the overall design. 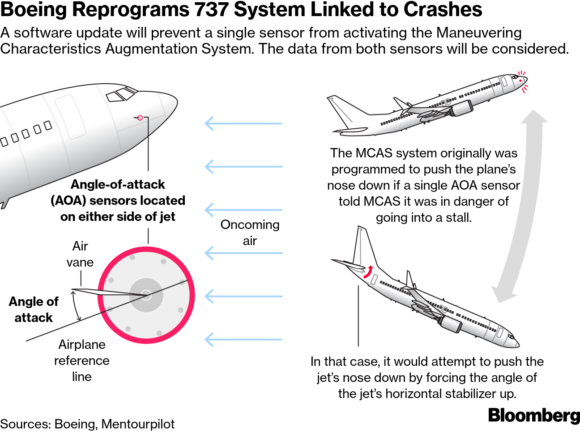 Meanwhile, Boeing is in the final stages of completing its software fix application to the FAA, and is preparing for a certification flight. It said this week it still expects regulatory clearance during the fourth quarter to return the 737 Max to service. Approvals in other regions are likely to come after. In Europe, regulators plan to do their own flight tests, though they have said they will try to keep any delays as short as possible.

Airline customers have been cautious on the Max’s return. Southwest Airlines Co.’s CEO said on Thursday he isn’t sure whether the FAA will sign off this year, and after that it will take as long as two months to train pilots and get aircraft ready to fly. Norwegian Air Shuttle ASA said this week it expects the Max to remain idle until at least late March.

The impact of the Indonesian report on the plane’s return to service isn’t clear. Some aviation-safety regulators, such as India’s, have said that Boeing has already addressed many of the concerns raised by Indonesian investigators and the U.S. FAA has already required Boeing to make major changes to the plane. However, the tough findings in the report could also raise new calls for delay.

“This report is the final nail in the box that confirms Boeing’s failure to insure a safe design and the FAA’s lack of adequate oversight to catch that,” Jeffrey Guzzetti, an aviation safety consultant who formerly headed FAA’s accident investigation division, said in an interview.

However, Guzzetti said that both the planemaker and the U.S. regulator have already instituted sweeping changes in how they are assessing the 737 Max’s design, so he doesn’t see the findings as a major new hurdle.

“I don’t believe the issuance of this report is going to further delay the ungrounding of the Max,” he said. “It’s really in the background noise of what has already become a political charged situation.”

Back in Indonesia, the NTSC presented a slideshow summarizing its findings to families of the Lion Air crash victims in Jakarta on Wednesday. It said the MCAS was overly reliant on a single angle-of-attack sensor, making the system vulnerable if the sensor malfunctioned. The investigation found that a replacement sensor installed on the doomed Lion Air plane wasn’t calibrated properly during the repair.

According to the report, the problems with flight-data readings were initially detected on an Oct. 26 flight from Tianjin in China to the Indonesian city of Manado. An examination of the angle-of-attack sensor showed it became unreliable in cold temperatures. An engineer in Manado suggested the crew continue to Denpasar in Bali for repairs.

“This indicated that the aircraft was released with known possible recurring problem,” the report said.

On a flight from Denpasar the day before the crash, the crew on the 737 Max ignored malfunctioning indicators, according to the NTSC. It said the pilot was confident about continuing because the aircraft was controllable and the weather along the route was good. The decision to keep flying was “highly unusual” after getting warnings for an imminent stall, according to the report.

Previous reports have shown that an off-duty pilot traveling in the cockpit of that flight helped disable the malfunctioning control system. According to the NTSC report, the captain had asked for the deadheading flight crew’s assistance, and kept the fasten seat-belt sign on.

“These actions indicated that the captain was aware of the need to use all available resources to alleviate the matter to complete the flight to the destination,” it said.

The problems encountered weren’t properly detailed in the post-flight report, which was filed outside office hours and not processed until the following day, the NTSC said in the report. “The incomplete report became a hazard as the known or suspected defects were not reported which might make the engineer unable to properly maintain the airworthiness of the aircraft.”

The doomed flight’s crew, who might not have been aware of the previous problems, failed to complete checks on the aircraft due to distractions from the flight system, increasing their stress levels, the report said. They also didn’t declare an emergency or ask for special handling, which would have helped to reduce their workload.

There seemed to be a lack of communication among the flight crew, with the captain not explicitly saying how much difficulty he was experiencing controlling the aircraft, it said. “Most of the components of effective crew coordination were not achieved, resulting in failure to achieve the common goal of flying the aircraft safely.

Before its release, both Lion Air and Indonesian regulators objected to investigators’ findings on the grounds that they received too much of the blame, people familiar with the matter said last month.

In its statement Friday, Boeing said it has redesigned the way angle-of-attack sensors work with the MCAS so that the mechanism turns on if both sensors agree, activates once in response to erroneous readings, and be subject to a maximum limit that can be overridden with the control column. It said it is also updating crew manuals and pilot training.