Australia’s indigenous people say the bushfire-ravaged country is paying the price for ignoring their expertise in managing the ecology of the world’s-driest inhabited continent.

The fires have already burned more than 6 million acres — an area the size of Massachusetts — and caused smoke haze to blanket Sydney and other cities. With a deepening drought suggesting there’s no end in sight to the crisis, indigenous fire practitioner Victor Steffensen is calling for a radical change in how the land is managed.

“The Western mindset is always about dealing with problems while they’re doing damage — it’s reactive,” Steffensen, 46, said from Cairns in the nation’s far northeast. “If we can use our way, these types of fires will never get the chance to start.”

This year, those preventative efforts have proven to be fatally inadequate as the fire season got off to a ferocious and early start due to tinder-box conditions. Dozens of blazes, usually caused by lightning strikes, quickly got out of control, often in remote areas which firefighters found difficult to access.

Six Australians have been killed and the deaths of more than 2,000 koalas in New South Wales state alone have sparked concern that the species is being pushed toward extinction.

The indigenous approach is to manage the landscape with so-called “cool, slow” controlled burns often conducted at night. They’re designed to reduce dangerous fuel loads of scrub and fallen timber on forest floors, and incrementally tackle large tracts of land with multiple small-scale burns. Such an approach is more labor intensive and takes longer. But the lower intensity and slow progress of the fire gives animals chance to escape and protects the forest canopy.

“Indigenous burns are done over smaller areas at lower intensities,” said Justin Leonard, who has spent two decades studying the risks from bushfires to life and infrastructure with the Commonwealth Scientific and Industrial Research Organisation. “The innate lesson they provide is we will never defeat fire in this country, so we have to use it as a tool and adapt.”

As this year’s fires destroy millions of dollars of property and choke the inhabitants of Sydney, anger has been directed at the conservative government, with accusations that policies supporting the coal industry and refusing to punish greenhouse-gas polluters may be exacerbating climate change.

Natural Disaster and Emergency Management Minister David Littleproud has ordered a parliamentary inquiry to develop a national approach on reducing fuel loads and is calling for proponents of indigenous land management techniques to make submissions.

“There’s thousands of years of experience that we need to tap into,” Littleproud told reporters last week. “We’ve been ignorant to that.” 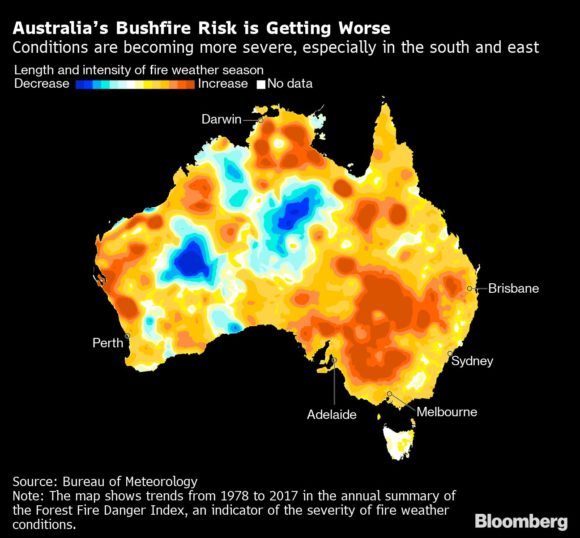 The bushfire problem is getting worse. A trend toward longer dry seasons has reduced the time available for preventative burning in cooler months by regional fire services that are often staffed by volunteers.

With limited time and resources, firefighters focus their efforts on land close to residential areas. Their back-burns are typically conducted at a higher intensity, with bigger areas of forest burning faster and hotter — creating a scorched earth buffer near neighborhoods but destroying more flora and fauna in the process. More remote areas are less likely to be tackled, leading to a build up of fuel that can cause catastrophic blazes in dry years.

The hazards of such a strategy were shown at the weekend when fire services lost control of a back-burn in the Blue Mountains west of Sydney, resulting in the loss of at least 20 buildings.

For the first Australians, whose culture traces back at least 60,000 years, fire is central to their way of life, an important spiritual symbol as well as a tool for hunting, cooking and warmth. Many of their traditional ways of managing the land were swept away after the arrival of British settlers and convicts in 1788. In the years that followed, the indigenous people were forced from their land and their cultural beliefs were often held in disdain by white Australians. They remain the poorest and most disadvantaged group in Australian society.

Steffensen says expanding indigenous fire-management practices could help provide employment as trainers and reduce welfare dependence. He’d like to see other traditional practices adopted too, in areas such as land management, natural medicines and water conservation.

“All these government departments, environmentalists, national parks, farmers and pastoralists have the best intentions but they all have their different interests,” said Steffensen, who founded Firesticks, a company that provides workshops on indigenous back-burning techniques. “Doing it our way on a continent-wide scale would be costly and take up a lot of working hours, but in the long run it could save billions,” he said.

In the meantime, there’s little sign of the rains needed to quench the fires. The national weather forecaster predicts drier-than-average conditions for the nation’s east until at least March.

He said the fire service has worked with indigenous fire organizations and sees their value.

“It adds to the suite of hazard reduction-methods we use,” he said. “We know not everything is about back-burning — we need to consider local ecology. We’ll look at anything that helps give us the upper hand.”