The world’s biggest developer of offshore wind farms has come up with a unique solution to a potentially expensive problem.

Denmark’s Orsted A/S is working on a plan to send divers to the sea floor to place a cover over damaged cables that connect from its offshore wind turbines, potentially saving it from repairs that could cost as much as 3 billion Danish kroner ($489 million).

“It’s almost like a band aid that stabilizes and protects the cable,” Orsted Chief Executive Officer Mads Nipper said in an interview. “If we can send divers down, place this band aid around it and stabilize it with rocks, we might actually not need to replace or repair as many.” 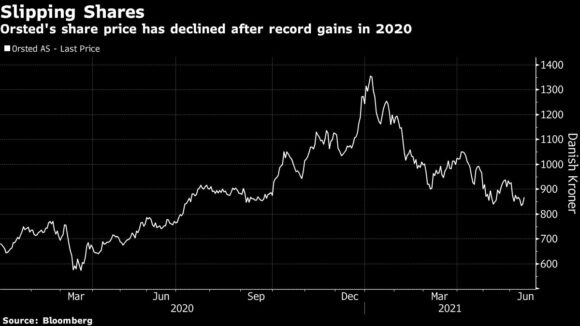 In April, Orsted disclosed that cables at as many as 10 of its offshore wind farms needed to be repaired or replaced because they had been scraping against rocks on the seabed. Shares in the company fell 6.7% that day, the biggest drop since March 2020.

The wind-farm developer is currently testing the diver solution and plans to scale it up to work with the turbine cables, Nipper said. He didn’t provide an estimate on the cost or potential savings.

About 90% of the world’s offshore wind farms use the same design that led to the damaged cables, and other companies could have a similar issue, according to Fraser McLachlan, chief executive officer at GCube Underwriting Ltd., an insurer for renewable energy projects. McLachlan said his company has worked on the majority of the wind farms in the seas around UK and Europe.

“There’s going to be many more issues bubbling to the surface,” McLachlan said.

Orsted has by far the most offshore wind farms in operation, with more than 7 gigawatts of installed capacity. The company’s shares have declined about 30% so far this year, following a record 80% gain in 2020.

Nipper said the company plans to spend about $57 billion by 2027 to try and cement its status as a green energy super-major and the world’s leading offshore wind developer. The company is facing increased competition from European utilities like Iberdrola SA and Enel SpA, as well as oil majors including BP Plc and Royal Dutch Shell Plc.