The aftermath of Hurricane Irma has left deep scars in the tiny island nations that were in the path of the Category Five storm just before it slammed into Florida.

The toll in Antigua and Barbuda added up to more than $220 million, according to one assessment backed by the United Nations—more than a quarter of the annual tax revenue collected for 2017. The island of Barbuda lost nearly half of its houses. And the island has nothing like the economic might of the U.S. to alleviate the damage.

Scientists have sharpened their analytical tools in the four years since Irma and now are able to quickly establish direct links between extreme weather and warming temperatures. If they did a study that attributed the supercharged storm’s power to climate change, who should pay the bill? Antigua and Barbuda, with fewer than 100,000 citizens, has contributed a minuscule portion of the greenhouse gases that are heating the planet. Yet developing nations often bear the brunt of climate impact. 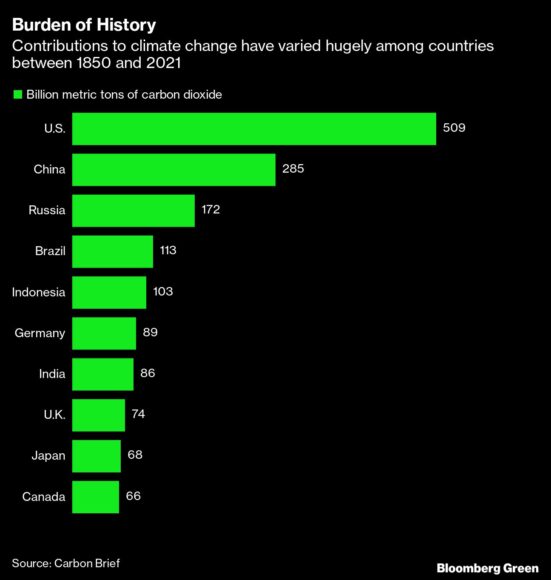 That’s why activists are pushing the world leaders gathering for COP26 talks in Glasgow, Scotland, to prioritize what climate diplomats call “loss and damage.” It’s a polite way to describe the difficult process of getting rich nations, with responsibility for the vast majority of historic carbon emissions, to compensate poorer countries wrecked by storms, floods, droughts and fires.

The landmark 2015 Paris Agreement left unanswered questions around liability and redress, says Simon Addison, principal researcher at the International Institute for Environment and Development. “There’s a massive financial hole that needs to be filled but no one who’s stepping up to do that.”

Annual climate negotiations tend to focus on what countries can do to slow global warming by cutting emissions, a task that benefits rich and poor countries alike. Less attention is paid to working out a system for dealing with impacts already baked into a world that’s warmed by more than 1.1°C since the 1800s.

It’s hard to say exactly how much money will be needed to deal with the problem of climate devastation. One study estimates a toll as high as $580 billion in economic losses each year by the end of the decade, and that figure could surpass $1 trillion by 2040. A basic concept of fairness, which is supported by many mainstream environmental groups, is that these global costs should be borne in proportion to how much each nation has polluted in the past.

One idea that will be discussed at COP26 is that rich countries should contribute to two funds managed by the UN. The first would be used to provide aid during emergencies, such as the direct aftermath from Irma or flooding in Uganda this year. The second would be to help nations manage slow-burning climate disasters like drought.

“We need to establish loss and damage as a top pillar of climate action,” says Sandeep Chamling Rai, a senior adviser at WWF based in Singapore. Born in Nepal, he’s witnessed the slow expansion of lakes as Himalayan glaciers melt, causing regular floods that have ruined towns and villages. Rai says the really tough part is getting rich countries to accept a moral responsibility. “The funding needs to be based on a historical responsibility principle and also on a solidarity principle,” he says. “It’s more a political debate than a technical debate.”

That doesn’t mean the technical details would be easy. Past efforts to establish a mechanism for damage claims have failed to gain momentum. Nearly a decade ago, at COP19 in Warsaw, saw the introduction of the International Mechanism for Loss and Damage. It took almost seven years to launch the Santiago Network, a group to provide technical assistance for countries making damage claims. Today there’s little to show for this other than a website.

“When countries suffer economic losses from climate change, their ability to invest more in adaptation is reduced,” says Carolina Schmidt, Chile’s environment minister who served as president of COP25 and runs the Santiago Network. She says the organization has been able to provide some assistance to the few nations that communicated their needs, which “is a sign that developing countries also need help to identify what they need for averting, minimizing and addressing loss and damage.”

Establishing the precise climate risks a country faces and then estimating the potential costs is a complicated task. A requirement to prove that the events were caused directly by climate change would require scientists to conduct attribution studies. That takes time and money. In situations where the impacts are drawn out over a long period of time, impoverished governments would need to collect large amount of data—another drag on manpower and resources.

Demands for wealthy countries to do more are set to dominate discussions in Glasgow. Rich nations are under pressure to deliver on a decade-old promise to raise $100 billion a year in climate finance, and negotiations will continue on a framework to facilitate the trading of carbon credits that will channel funds to emerging economies. But advocates for “loss and damage” funds see it as a separate category of resources owed for harm already done through historical emissions.

Poor nations emphasize that they’re not looking for a handout. “What we call for is full payment of the debt owed to us by developed countries for threatening the integrity of the Earth’s climate system,” the Bolivian delegation wrote in a submission at COP13 in 2007.

Top photograph: Aerial view of the Codrington lagoon on Sept. 22, 2017 in Codrington, Antigua and Barbuda. Hurricane Irma inflicted catastrophic damages to the island nation. The storm surge changed its landscape by creating a new ocean gap along the edge of the lagoon. Photo credit: Jose Jimenez Tirado/Getty Images.

On Baldwin’s ‘Rust’ Movie Set and Others, Union Guidance Is Key to Gun Safety

Bermuda’s Tax Advantage for Re/Insurers to Be Cut With 15% Global Minimum Tax: Fitch