Bosses are hellbent on getting their staff back into the office. It’s just that the rules don’t necessarily apply to them.

While 35% of non-executive employees are in the office five days a week, just 19% of executives can say the same, according to a survey by Future Forum, a research consortium backed by messaging channel Slack. Of the share of employees who are making the commute, more than half say they’d like at least some flexibility, and non-executives broadly report having a much worse work-life balance than their bosses.

Furthermore, the disparity is growing. In the fourth quarter of 2021, non-executives were about 1.3 times as likely as their bosses to be fully in office. Now it’s nearly twice as likely, and the share of non-executives who are in five days a week is the highest since the survey began in June 2020, according to the more than 10,000 white-collar workers polled in the U.S., Australia, France, Germany, Japan and the UK Future Forum’s definition of “executives” includes those with a title of president or partner or anything in the C-suite.

The gap points to a double standard in return-to-office messaging — executives from Bank of America Corp. to Alphabet Inc.’s Google are prodding their workers to return in part to boost in-person collaboration, but bosses themselves are somewhat exempt. Companies are also trying to justify long-term office leases or state-of-the-art headquarters like Apple Park in Cupertino, California. 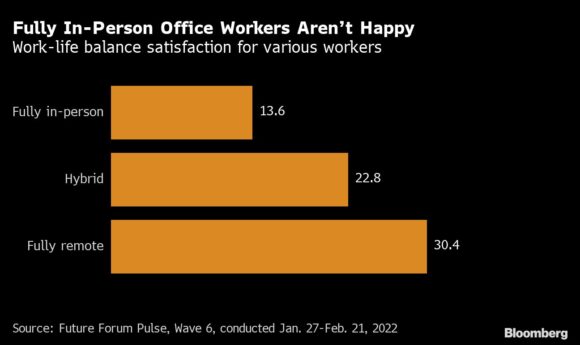 Employees aren’t having it. According to the survey, workers who are unsatisfied with their flexibility are now three times as likely to say they will “definitely” look for a new job in the coming year. It also showed a feeling of work-life balance fell twice as much for full-time office workers compared to those with location flexibility. “Top down mandates just generally don’t work,” said Brian Elliott, executive leader of Future Forum.

In addition to improving workers’ mental health, offering more options can move the needle on diversity, equity and inclusion, too. Some 82% of Asian/Asian American and 79% of Black respondents would prefer a hybrid or fully remote work arrangement, compared to 77% of White respondents. Women and working mothers expressed a desire for location flexibility more than ever as childcare costs continue to rise.

As the debate on return-to-office policies evolves, Future Forum recommends schedule and location flexibility in order to retain top talent, even if it means breaking cultural traditions and developing new workflows. “People being in the office gives you the illusion of control, but it’s just an illusion,” Elliot said. “It doesn’t mean they are being productive.”

–With assistance from Matthew Boyle.