City of London workers looking to save money may want to embrace the office over winter as the cost of working from home soars alongside energy bills.

Those prepared to go into the office every day could save about £50 ($60) per week in January 2023 if they can walk, run or cycle into their workplace. That’s thanks to the money they’ve saved by not heating a home for the whole day, according to estimates by price comparison site Uswitch.

Those working from home in January could expect to pay around £175 a week in energy costs and other incidentals included in Bloomberg’s calculations such as buying in your own coffee, a freebie in many offices. The combined cost of energy bills — factoring in the lower consumption expected — and five return trips on the Tube from London’s Zone 4 would be about £160 a week in January 2023, a £15 saving. 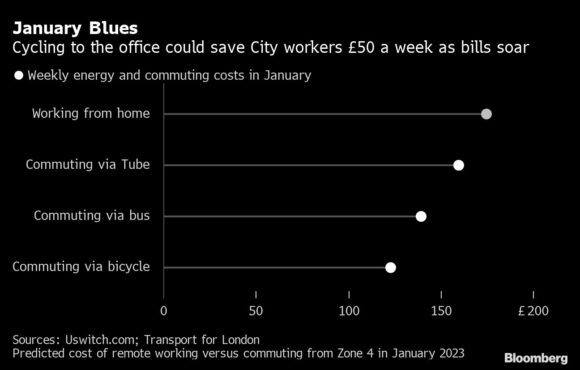 For those taking the bus, the total cost is about £140, a £35 weekly saving. In both cases, any rise in the cost of the commute will eat into those savings.

Uswitch estimates that the average monthly energy bill could hit £683 in January for home workers, compared to £492 for those heading to the office. It assumes remote workers use 25% more electricity and 75% more gas per day including from central heating.

“People are going to be really struggling to heat their own homes and they are going to look for warmth in other places — we know that is a coping mechanism that people use, whether that is going to a public space, such as a library or a church maybe, or whether it’s going to work when you usually would work from home” Matt Copeland, policy officer at National Energy Action said. “Those are the options people will consider and people will take to actually find warmth.”

The incentive to come into the office is likely to be welcomed by some in the City of London, where finance bosses have been pushing for a return to the office. Right now less than half of workers in the UK’s banking sector go into the office on an average day, and just 18% of insurance sector employees do so, according to a survey by consultancy Advanced Workplace Associates.

–With assistance from Leigh-Ann Gerrans and Asad Zulfiqar.