The National Weather Service says that the threat of substantial spring flooding in North Dakota is low, including along a river in the eastern part of the state that has caused millions of dollars of damage in the last decade.

The outlook shows a 50 percent chance that the Red River that divides North Dakota and Minnesota will reach 20 feet in the Fargo area, which is 2 feet above flood stage. The chance of major flooding is about 5 percent.

The Fargo and Moorhead, Minnesota, area dealt with three straight years of high water beginning with a record crest in 2009 that destroyed about 100 structures and led to a massive sandbagging effort to save the city. Fargo last experienced significant flooding in 2013. 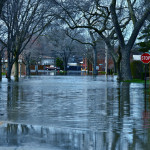 The weather service says the snowpack and snow water equivalent are at 40 to 80 percent of normal in most areas and parts of western North Dakota have no snow on the ground. The climate outlook calls for warmer-than-normal temperatures with near-normal precipitation heading into spring.

“There just isn’t that much snowpack to worry about,” said Greg Gust, weather service meteorologist in Grand Forks. “So unless we get some really big snow dumps in March, we won’t have much runoff … kind of like last year.”

Hydrologists say heavy spring rains or ice jams could lead to some minor flooding in some areas of the Souris, Missouri and James River valleys.

Devils Lake is expected to have “a typical late-spring rise” this year, Gust said. The ice-covered lake currently is down about 11/2 feet from this time last year. There is virtually no chance the lake will succeed its record level set in June 2011

The next flood report is scheduled for March 3.

A Picasso, an $18M Hole, a Casino Owner, an Auctioneer, an Insurer and a Contractor