At the corner of Cole and Monticello Avenues near the Highland Park area of Dallas, an excess and surplus insurance brokerage was born—twice, it could be argued. The company that became Heath Insurance Brokers, one of the largest specialty insurance brokers in the United States, had its humble beginnings there in 1992, in a small office that previously housed a retail insurance agency fallen victim to a merger.

Heath eventually moved to more spacious offices in a modern glass high-rise across the street. Now, having become an independent, management-owned company after a 12-year affiliation with London-based Heath Lambert, the firm is being reborn as Colemont Insurance Brokers.

With apologies to Mr. Shakespeare, what’s in a name? A lot and a little, in Colemont’s case.

Chief Executive Officer Marshall Kath says the new name not only reflects the company’s heritage by referencing the corner it has called home for some 13 years, it also exudes personality, like the company itself. Chairman Gene Eisenmann insists that the firm remains the same as it ever was: dynamic, entrepreneurial and responsive.

“While the name is changing,” Kath said, “who we are, what we do, how we go about getting it done—all those good things that our retail agents have come to expect of us—that all stays the same. There’s no wholesale—no pun intended—change that we see there. We don’t have to change it; it’s worked well. It’s just a change of the name.” 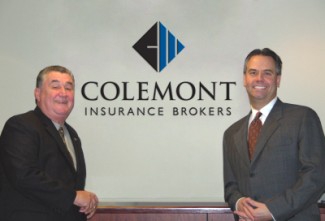 Eisenmann, a company founder who has been referred to by some as the “godfather of the surplus lines industry in Texas”—perhaps in part because of the Marlon Brando-as-Don Corleone timbre of his voice, in part because of his New Orleans roots—added that the company’s customers should “know that there will be no other changes whatsoever [in the way we operate]. We’ll continue to represent everybody the same way we have in the past.”

Management’s buyout of the company from the Heath organization closed on March 30, 2004. But Kath said the process began nearly a year earlier, in the summer of 2003.

“The original genesis with Heath was that we would be their North American wholesaler,” Kath said. “And they had the expectation then, in 1992, which was quite fair, that we would produce a lot of business into London for them. And in fact that’s really the model they have for all of their overseas operations, not just us. Over time, as we grew the vast majority of our business stayed here domestically in the U.S.”

He explained that in 2003 Heath Lambert undertook an evaluation “of where their future was taking them, what core business they were really in. They looked at us and said, ‘you’ve done well, you’ve done very well, but you really don’t meet our criteria and objective of sending a lot of business into London.'”

The parent company then asked the U.S. operation to consider splitting off from the Heath Lambert group.

“And we said, no problem, we can do that,” Kath said. He added, “They were a motivated seller and I would say that we were a motivated buyer. … It was a great opportunity. It worked for them and it worked for us. Everybody had an alignment of interests in wanting to make that happen.”

Rapid, organic growth
Since 1992 Colemont (Heath) has been on a rapid growth track. According to company figures, it has grown from producing $17.5 million in premium in 1992 to right at $1 billion in sales in 2004. Its book of business is “very, very broad,” Kath said, and includes just about every industry sector.

The expansion has been primarily organic. Within 18 months of its founding the company had five offices in the United States; it now has 14 physical locations and 380 employees. “We have not really been acquisitive in our history, although there are a couple of acquisitions that we’ve done over the years,” Kath said.

“Perhaps somewhat surprisingly there’s been much more acquisition evaluation opportunities this year. People heard we are on our own and truly independent and [they are] saying ‘maybe that’s the place I want to be.’ As we evaluate those and as they make sense, we’ll do those deals.”

He noted that, “on the broker front we’ve actually hired more brokers this year than we have in our last two years combined. Some of that also is because of our cementing our future, if you will.” Kath suggested that the company’s independent status is an attraction to brokers because there are so few truly independent operations in the marketplace. “Independent from a capital structure, independent from some affiliation, independent in an operating structure sense,” he said. “Almost anyway you want to use that word we meet the test. And you keep checking off the boxes and ask how many are there out there that meet this criteria and there’s not even a handful.”

A changing industry
As Heath, Colemont grew along with an excess and surplus industry that has changed significantly throughout the years. Before Eisenmann entered the insurance industry in the 1970s, he was a police detective in New Orleans, a job he left as soon as he could, he said. Joining first The Hartford and then Fireman’s Fund, Eisenmann landed in Dallas in 1978 to open an office for a large national specialty broker.

“In [the ’70s] the industry was very different than it is today,” Eisenmann said. “There was more loyalty between the insured, the agent and the company.” He also noted that with less vertical integration, brokers at that time were able to compete on an even level. “In ’78 there were only a handful of national brokers. Then, the mergers and acquisitions of the ’80s and ’90s caused people to leave and start their own shops. They were victims of the mergers so they left to do their own thing.” That’s exactly what Eisenmann did. A merger in the early ’90s prompted him to strike out on his own, taking his book of business with him.

He said technology and increased competition have produced major changes in the way the industry operates. “Back in the ’70s a quote on a large account could be completed with one 10-minute phone call,” Eisenmann said. “Now it’s document after document. First it was telex, then fax, now e-mail, next who knows what we’ll have. … The faster we can get the quote together, the more we retain the account; agents don’t want to wait.”

“Gene and I have been in this happy party from the beginning of time,” said Kath, who joined the company initially as chief financial officer. The two met through the firm’s accountant.

“One interview and we decided he was the guy,” Eisenmann said.

The company opened with a staff of six people, including Kath and Eisenmann. They moved into their original office space on a Friday, “and we were open for business on Monday,” Eisenmann said. “I had my kids come down over the weekend. We had rented space [that had been vacated by] an insurance agent … and we got the space very, very cheap. They left their old metal furniture; they left their old antiquated telephone system. Somehow we were able to clean the place up, get the phone system working, the desks all cleaned out and ready to go, and Monday morning we were in business.”

Eisenmann and Kath said Colemont will continue operating with that original, entrepreneurial spirit. “There’s no parent company sending us business; we have to earn everything we make,” Eisenmann said.