Despite the decline in month over month activity, several leading acquirers have ramped up their acquisition activity from one year ago. Arthur J. Gallagher (AJG) leads the way with five transactions year-to-date (three this time last year), including two international deals. Brown & Brown (B&B) picked up four acquisitions (two this time last year) that run the gamut of product and distribution including retail, wholesale, benefits, and P&C. These four deals amounted to nearly $12 million in additional revenue.

Although private equity groups (PEGs) have made few substantial direct investments since 2007, national brokers backed by private equity investment will continue to be acquisitive. One such firm is Alliant Insurance Services. Known as a strategic acquirer, Alliant purchased a regional employee benefits firm based in Chico, California enabling it to expand its existing presence in Northern California. Another is USI Holdings which only made one acquisition in 2009. With renewed focus, USI announced two transactions, both in the benefits arena. In one deal, USI picked up about $13 million in revenue with the purchase of the employee benefit insurance brokerage offices in Ohio, Kentucky, and Missouri of National City Insurance Group, Inc. from The PNC Financial Services Group, Inc. PNC has divested of other National City Insurance Group business since its acquisition of National City Corp. in October 2008. Two other private equity backed leading acquirers have been silent so far this year. They are Hub International and Ascension Insurance. 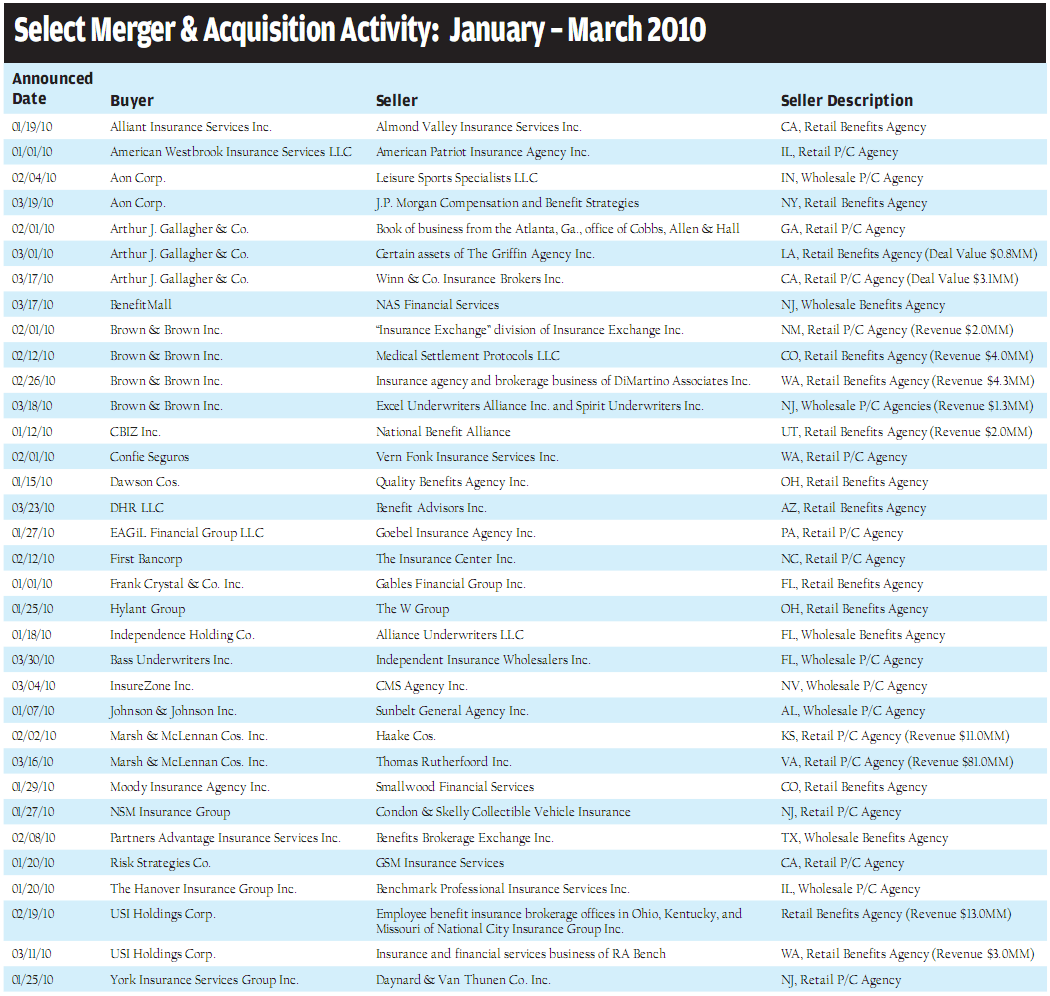 The biggest brokerage transaction of the quarter came in March when Marsh & McLennan Agency (MMA) announced the acquisition of Thomas Rutherfoord, Inc. (Rutherfoord) in VA which created the foundation of MMA’s Mid-Atlantic region. Rutherfoord was a top 50 broker – the second to be picked off by MMA in four months. Since November 2009, MMA has acquired foundation agencies in four different geographies amassing roughly $170 million in revenue.

With insurance brokers dominating the quarter acquiring 49 firms or 91 percent, there weren’t many deals to be had by banks, insurers or others. Back in January, two insurance companies acquired wholesale agencies with underwriting capabilities — a move that makes financial and strategic sense and something we’ll see carriers do more.

Throughout last year and most of the first quarter, lingering uncertainty surrounding health care reform hampered employee benefit deal activity. Even now, with the passage of reform legislation, most buyers’ opinions have not changed. Employee benefit acquisitions will continue but with caution and scrutiny. Benefit firms with size and scale that cater more to the large group market will be of most interest. Firms catering to the small group market will receive the most scrutiny and perhaps no attention at all. It will take time for both buyers and sellers to get their arms around what the legislation means for their business.

With the hard market nowhere in sight, the impending rise in the capital gains rate, and passage of health care reform, it is widely expected that M&A activity will pick up, especially in the second half of the year. Consolidation just may be a mode of survival.