Sanford “Sandy” Weill, the tycoon who built financial conglomerate Citigroup Inc. into a massive U.S. commercial and investment bank, said it is time to split up the biggest banks so they can go back to growing again.

The comments were an astonishing about-face for Weill, who in the late 1990s smashed the U.S. law known as “Glass-Steagall” that divided commercial and investment banking. Riskier investment banking should be separated from safer commercial banking and the government should only have to insure the latter, Weill said. 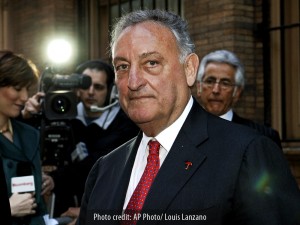 “The world changes and the world that we live in is different from the one that we lived in 10 years ago,” Weill said in an interview with television network CNBC.

Other long-time Wall Street players were quick to applaud Weill and the shares of the biggest banks rallied.

Said Arthur Levitt, Weill’s former business partner in the 1960s and a chairman of the Securities Exchange Commission in the 1990s: “It’s a very difficult statement for him to make since he was largely responsible for the repeal of Glass-Steagall and he’s absolutely right. This is a very significant statement.”

But even if a growing number of former bank executives are calling for break-ups, there is little evidence that current bank executives or regulators are listening. Big banks are dieting instead of amputating. They are selling smaller units and laying off staff without completely dismantling themselves.

The closest any banks have come so far is in shrinking their balance sheets. Morgan Stanley, for example, said last week that, by the end of 2014, it plans to reduce fixed-income trading assets by about 30 percent from third-quarter 2011 levels, on a risk-weighted basis. Citigroup has reduced its Citi Holdings unit, which holds assets the bank hopes to shed, to $191 billion from about $650 billion in 2009. Regulators are putting some limits on big banks, lawyers said. They are blocking them from making big acquisitions and demanding that “too big to fail” banks fund themselves with more equity capital.

U.S. Treasury Secretary Tim Geithner said on Wednesday that these steps and others the United States has already taken are serious. “Congress put in place limits on how large they can get and deprived government of the ability to come in and rescue them from their mistakes,” he told lawmakers at the House Financial Services Committee hearing.

Breaking up big banks is logistically difficult, given the thousands of legal entities involved and thorny questions about how to allocate existing debt across the different businesses, for example.

But Weill called for far deeper changes among the major banks, noting that when investment banks are no longer eligible to be bailed out by the U.S. Federal Reserve, they can go back to innovating and growing fast.

“Let’s have a creative investment banking system like we have always had, so that the financial industry can once again attract the best and the brightest like they are doing in Silicon Valley,” Weill said, referring to the region near San Francisco often seen as the epicenter of the technology sector.

The Glass-Steagall law, known as “The Banking Act of 1933,” was passed during the Great Depression to help restore faith in banks. It revamped the financial system, creating, for example, deposit insurance, in addition to separating commercial and investment banking.

Looser regulations in the 1980s and 1990s chipped away at Glass-Steagall. But when Weill’s Travelers Group, which included an insurer and the Salomon Brothers investment bank, took over Citicorp in 1998, it needed a special temporary regulatory exemption to operate those businesses together.

Weill lobbied heavily for key provisions of Glass-Steagall to be repealed, a change he won in 1999. Since then, the biggest U.S. banks have grown even bigger compared to the overall economy, a trend only accelerated by the financial crisis.

Bigger is not necessarily better, though. For the past two years, Duke University law professor Lawrence Baxter has researched the value of big banks. In a forthcoming journal article, he concludes that large banks have not proven to be more efficient, especially in light of the government subsidies they receive. But he did note that they have some advantages such as the ability to serve large global customers. “Our own study indicates no clear advantages for universal banks at this stage,” Baxter wrote.

Other major former bank executives have also called for banks to be split up. Phil Purcell, the former chairman and chief executive officer of Morgan Stanley, wrote in an opinion piece in the Wall Street Journal last month that shareholders would benefit.

Breaking up the biggest banks could double or triple the value of the companies, Purcell wrote. Purcell long argued for “financial supermarkets” starting with his work at McKinsey in the 1970s, before he changed his mind.

John Reed, the former chief executive of Citicorp who worked with Weill on the 1997 merger with Travelers, said in March that he regrets his role and is astounded at the way banks continue to fight regulations to rein in risky activities.

“It wasn’t that there was one or two or institutions that, you know, got carried away and did stupid things. It was, we all did … and then the whole system came down,” Reed said on Bill Moyers’ public television show.

Former regulators have also argued for break-ups. Sheila Bair, chairman of the Federal Deposit Insurance Corp. until last year, wrote in a January column in Fortune that shareholders should press for banks to break themselves up, and that banks’ customers would benefit.

Soon after JPMorgan Chase’s Chief Executive Jamie Dimon said the bank could lose billions from bad credit derivatives trades in May, Bair wrote another column calling for big banks to be broken up because they are too big to manage effectively.

There is some limited support for breaking up banks in Washington. Senator Sherrod Brown has introduced a law that would limit how big banks can get, for example through limiting how much they can borrow and how big they can be relative to the overall economy.

The Ohio Senator, a Democrat, said in a statement on Wednesday: “Allowing Wall Street megabanks to grow so large and over-leveraged … isn’t fair to taxpayers.”

Elizabeth Warren, an outspoken consumer advocate and Harvard law professor who is running for U.S. Senate, believes the Senate ought to consider a return of Glass-Steagall.

But Brown’s bill is seen as a long-shot and Bair noted in her May column that “in Washington, no one is seriously discussing breaking up the big banks.”

Many on Wall Street were flabbergasted by Weill’s comments.

“I think it was a guy with a mask on who looked like Sandy Weill,” said Alan “Ace” Greenberg, the former chairman and chief executive of Bear Stearns Cos, who is now an adviser with JPMorgan Chase & Co. “I’ve known Sandy for a long time and it didn’t sound like him to me.”