A state’s percentage of uninsured motorists is affected by a no pay, no play law, albeit modestly.

A new study from the Insurance Research Council (IRC) estimates that the uninsured motorist (UM) rate can fall by as much as 1.6 percent after a state adopts a no pay, no play law.

No pay, no play laws limit the compensation for people who were breaking the law when they were injured in a car accident. Breaking the law includes driving without insurance and, in some states, driving while intoxicated.

In the study, The Potential Effects of No Pay, No Play Laws, IRC provides a background on each existing state law.

For states without a no pay, no play law in effect, IRC developed a mathematical model to estimate the compensation for non-economic loss paid to uninsured third-party liability claimants in a given year. IRC says this estimate provides a reasonable upper limit proxy for the amount of money that is currently awarded to the uninsured population and would no longer be paid if a state implemented a strict no pay, no play law.

“The original intent of these laws was to relieve at-fault drivers who comply with state insurance requirements from having to compensate uninsured drivers for non-economic damages. Yet, little research had been conducted analyzing the effect of

no pay, no play laws on the overall insurance market,” said Elizabeth Sprinkel, senior vice president of IRC. “With this study, we now have more information on how these laws affect the population of motorists driving uninsured. This report, which also develops cost estimates for states that do not have no pay, no play laws on the books, highlights the benefits a strict law may provide to the average insured consumer.” 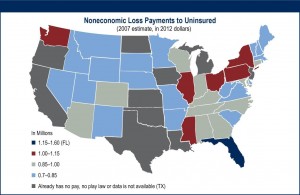