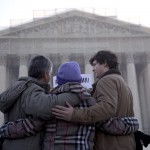 Today David Kosar can be considered one of the nation’s most outspoken insurance agents on the issue of gay marriage.

Kosar, owner of David Kosar Insurance Agency-American Family in Everett, Wash., has joined an amicus brief filed by 278 businesses, cities and organizations urging the Supreme Court to strike down the federal Defense of Marriage Act (DOMA).

The Supreme Court is set to hear oral arguments today in the United States v. Windsor, an appeal of a Second Circuit ruling finding a section of DOMA unconstitutional. On Tuesday the court heard more than hour of oral arguments in the Hollingsworth V. Perry challenge to California’s Proposition 8 ban on same-sex marriage.

Kosar signed on to the brief as part of the Greater Seattle Business Association, a lesbian, gay, bisexual and transgender chamber of commerce, an organization for which Kosar’s agency is a Gold Sponsor.

“I believe strongly in non-discrimination and equal rights and I put my business name on there,” said Kosar, who is gay and was married to his partner in December, 2012. “I definitely think DOMA needs to be set aside so that same sex couples have the same rights under the federal government that married couples have.”

AIG and Liberty Mutual did not return queries requesting comment for this article, but Marsh issued a statement explaining why the company signed on to the brief.

“Marsh & McLennan has joined many other leading companies in signing an amicus brief submitted in the case before the U.S. Supreme Court that challenges the constitutionality of the federal Defense of Marriage Act (DOMA). As stated in the brief, we ’embrace diversity both as an end unto itself and as a business imperative that permits us to attract and retain the most talented and productive workforce. We are happy to add our voice to this effort.”

Kosar emphasized that he signed as the independent owner of a small business, and he does not speak for American Family. He said he takes pride in the fact that he’s among a host of large businesses on the brief to lend the diversity of a small businessman’s voice.

“I’m a very small fish in a very large ocean,” he said. “I think it is important that the court hear from all sides, big business and small business. There is support for this across many demographics across the county.”

Kosar said that part of the problem as he sees it is that DOMA forces an employer like himself to put lawfully-married employees into two categories, and that creates regulatory, tax, benefits and morale problems.

An example he offered is that where most healthcare benefits are concerned, the law makes an employer withhold more from the W-2 of a lawfully-married employee if his spouse is of the same-sex rather than an opposite-sex couple.

What Kosar wants from the Supreme Court is a simple rule: That the federal government will not stop an employer from treating all of its married employees in the same way.

“We want to create the best, most productive work-place environment possible, so that our organizations can be as efficient, productive and competitive as possible,” he said. “It ill serves that objective when the federal government obliges us to treat one set of married employees differently than another.”

Gay marriage was at center-stage for the the Supreme Court this week. On Tuesday the Court tackled California’s Prop. 8 amid nationwide debate, protests, demonstrations and media coverage. The justices’ questioning signaled disparate views on the issue, including whether they should even consider the case.

If the Supreme Court takes the case and tackles the legal question of whether the 4th Amendment guarantee of equal protection law prevents states from defining marriage, it could essentially decide whether same-sex marriage would be legal in all states.

According to SCOTUSblog, a site that closely watches the Supreme Court and matters concerning the court, media coverage has been focusing primarily on how Justice Anthony Kennedy might vote in the case and Prop. 8 proponents have standing to defend the initiative.

To get broad industry opinion several insurance associations were contacted for comment for this story, and most did not reply, or replied that they were taking no stand.

“AIA doesn’t have an established policy on the issue,” said Willem O. Rijksen, vice president of public affairs of the American Insurance Association. Rikjksen said the matter just has not been brought up, and noted that no stand either way has been taken.

Same goes for the Independent Insurance Agents & Brokers of Washington.

“We have not taken a stand on the issue,” said Daniel Holst, executive vice president of the group.

Kosar said he doesn’t have a problem being one of the only insurance agents on the brief.

“I would have liked to see more insurance interests join in,” he said, adding that he realizes that it’s tough to put one’s name on something that can affect business. “I think at some point we as individuals have to stand up for what we believe in.”