On the federal terrorism insurance backstop, 93 percent of those polled said they expect the Terrorism Risk Insurance Act, which is set to expire Dec. 31, 2014, to be reauthorized by Congress.

On the Biggert-Waters Flood Insurance Reform Act, 75 percent said they expect Congress to delay implementation. (A bipartisan spending bill unveiled this week in Washington could postpone for about eight months some flood insurance rate increases triggered by the Biggert-Waters Act. It passed the House yesterday.)

The survey also showed many executives are expecting a stricter regulatory environment in the year ahead — with 70 percent saying they believe the federal government is interested in further expanding its regulatory oversight of insurers.

Forum participants included nearly 250 representatives from P/C insurance and reinsurance companies and organizations. Of these, roughly 40 percent responded to the survey.

“Many economic forecasts say that the U.S. and most global economies will grow stronger in 2014, and this means a greater need to protect more assets and income, which leads to greater insurance premium volume,” said Steven Weisbart, senior vice president and chief economist with the I.I.I. “Both personal lines (auto and homeowners insurance) and commercial insurance will see increased exposures. 2013 was the industry’s most profitable year since the Great Recession, and 2014 could be even better, barring major catastrophe losses.”

One way to lower expenses is by consolidation; 75 percent of respondents said they expect an increase in consolidation among insurers and reinsurers in 2014.

Below are the poll questions and full results. 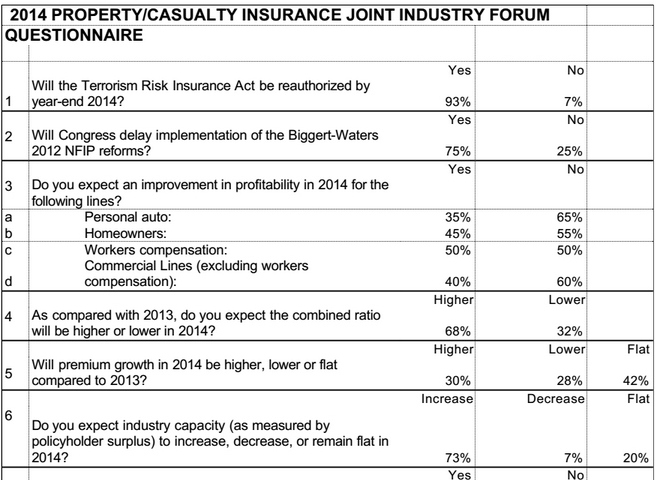