In the workers’ compensation space, not only have claim costs increased because of medical issues, but the landscape has also become much more complex. Along with the elevated incidence of fraud, economic fears, and a growing dependency on prescription drugs, more specific issues are challenging the industry, such as increased use of intrathecal pumps and spinal cord stimulators as well as diagnoses related to subjective symptoms (for example, reflex sympathetic dystrophy [RSD], fibromyalgia, post-concussion syndrome).

No wonder claim costs have skyrocketed since the 1990s, adjusters’ jobs have become more complex, litigation is more prevalent, and the industry is looking for ways to get matters under control.

The graph from NCCI shows the growth in medical claim costs from 1991 to 2012. The dollar amounts are staggering and highlight the need to identify and intervene on claims that are driving those costs. Simply put, early intervention is the next best thing to prevention. 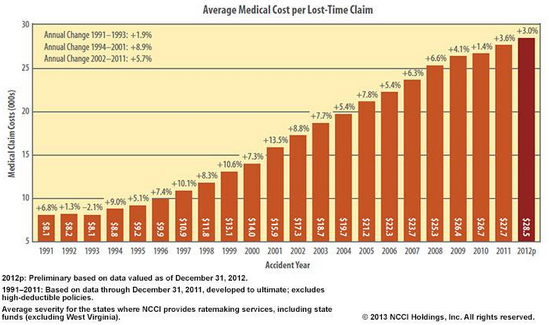 ISO Claims Partners recently conducted market research into those questions. The overwhelming response from carriers, third-party administrators, industry experts, and analysts can be summed up as follows:

If insurance professionals could spot exploding claims they would have a chance to intervene and control costs.

Identifying the claims is the first half of the battle. Organizations can then “intervene” in any number of ways to control costs while ensuring that claimants receive proper treatment:

The end result would ensure that claims with high-potential exposure are first recognized and then placed with the right people to drive the best outcome — because the reality is that these high-dollar claims have a grossly disproportionate impact on overall results.

John Geaney, a prominent workers’ compensation attorney from New Jersey, consults with his clients on a “9-1-1 team” approach for high-exposure claims. He indicated that “an early intervention model can pay huge dividends if the issues are spotted early.”

He provided an example that saved one of his clients $400,000 in medical and indemnity costs on one claim because the issue was pinpointed accurately and additional investigation and discovery provided the necessary evidence to defend the claim successfully

Identification and intervention work, and it doesn’t take many cases such as Geaney highlighted to prove the value in such a model.

While it may sound simple to identify such claims, in reality it’s extremely complex. Claims grow increasingly complicated for a number of reasons: secondary gain, unnecessary treatment, obesity, psychological issues, comorbidity, extended use of opioid medications, and fraud. All those issues should raise red flags, but many times they’re buried in medical records, PBM reports, bill review records, and so forth.

Additionally, it’s important to highlight that it’s not always the obvious “big” case involving fusion surgery that takes a turn for the worse. Sometimes it’s the seemingly innocent claims that prove to be most problematic — minor claims, medical-only claims, minimum lost time, and the like. Those types of cases tend to be overlooked, and it’s assumed they’ll close quickly — which is not always so. That’s where analytics can play a key role by scoring all claims, not just the “big” ones, and acting as a safety net within the claims organization.

Let’s be very clear: It’s not the adjuster’s fault. Having been a workers’ compensation and liability defense attorney for about 10 years, I can tell you firsthand that adjusters have a very difficult job, and they’re at the center of the claims process.

Based on the information received, their responsibilities include, among other things adjusting reserves, indemnity payments, medical payments, PPD/PTD/TPD, assessment of Medicare impact, state reporting, federal reporting and Medicare compliance.

With large case loads and numerous issues to contend with each day, adjusters can’t possibly spot each and every claim that could spiral out of control. That’s why predictive analytics and the use of data are essential tools to help adjusters ensure that suspicious claims don’t fall between the cracks.

Nearly 50 percent of all workers’ compensation executives surveyed by Towers Watson employed predictive analytics in some fashion in 2011, compared with only 18 percent in 2009. The trend is clearly moving toward adopting some form of predictive analytics in the workers’ compensation space.The reality is that data is captured at nearly every stage of a claim from first report of injury to settlement. In fact, Section 111 of the Medicare, Medicaid and SCHIP Extension Act requires unprecedented data not only to be captured but also reported electronically to the Centers for Medicare and Medicaid Services at the time of settlement or when there’s a responsibility for ongoing medical care. But are insurers using this data proactively? Or is the data captured, sent, and simply stored?

For those that choose to use the data in a proactive way, the ­benefits are well worth the effort. In its 2011 Predictive Modeling Survey, Towers Watson noted:

Additionally, Dowling & Partners reported in a research study that “leading carriers’ commitment and ability to effectively implement predictive modeling throughout their operations will increasingly differentiate their performance from other competitors, and the level of differentiation will only increase as they continue to advance their predictive modeling initiatives.” The study also indicated that “those carriers falling behind (or not recognizing the need to commit to predictive modeling) will likely find their future ability to compete and their profitability impaired as adverse selection works against them.”

Based on the complexity and volume of claims and the various types of data coming across the adjuster’s desk every day, it’s imperative that any predictive analytics be designed to reduce the adjuster’s workload, use data feeds to eliminate manual entry, provide simple and actionable outcomes, and use internal and external data that combines with active and experiential claims data to provide clients a stronger model based on industry experience.

Employing such an approach will not only streamline the process but will also ensure adoption and the best results possible. Data and analytics are essential elements of the claims-handling practice now, and it’s essential that they be used in creative ways to drive efficiencies and improve future outcomes. As science has proven, a species that does not adapt becomes extinct. The trends strongly suggest that data and analytics need to be part of the ­evolution of claims handling.