As much of the U.S. and the rest of the planet celebrated Earth Day, California politicos and leaders squabbled over how best to deal with the ongoing drought – which may or may not be caused by climate change, depending on which side of the global warming debate you’re on.

Even if you’re not from California or don’t do business there, but you like your fruits and vegetables, you may want to keep reading.

According a report in the Sacramento Bee, local water officials in letters sent to the State Water Resources Control Board accused the board of misusing its authority to impose mandatory conservation, and those officials took issue with the state’s proposal that watering lawns is an unreasonable use of water.

The letter was from the Placer County Water Agency, San Juan Water District, the city of Roseville and Sacramento County Water Agency, which say it’s unfair to be lumped in with communities that don’t have strong water rights under California law and that largely import their water from other regions, the paper reported.

Facing a fourth year of drought across much of the state, Gov. Jerry Brown and the State Water Resources Control Board earlier this month came out with the controversial measures that restrict water usage in the following ways:

Earlier this month the governor issued an executive order citing a “distinct possibility” that the drought will last through 2016 and beyond. The order called for expedited actions, and Brown has mandated that water usage be cut by 25 percent. 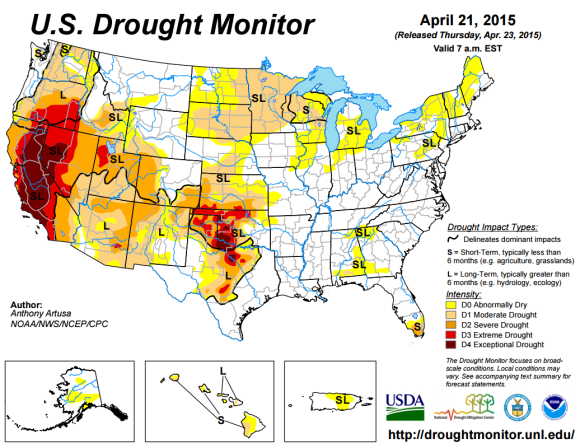 Brown’s water conversation efforts were struck another potential blow earlier this week, this time by a state appeals court ruling that a tiered water rate structure used by San Juan Capistrano to encourage conservation was unconstitutional.

The ruling may have implications across several local water authorizes throughout the state, many of which use some sort of tiered rate structure.

Brown called the ruling “a straitjacket on local government at a time when maximum flexibility is needed.”

“But you remember, the weather that’s happening in California, that weather will be reflected and show up in other parts of the world,” Brown said during an appearance on ABC’s This Week. “I can tell you, from California, climate change is not a hoax. We’re dealing with it and it’s damn serious.”

In that appearance Brown defended his decision to largely exempt agriculture from water restrictions. He was hammered for that move by opponents to his decision, who cited figures that show agriculture accounts for roughly 80 percent of California’s water usage.

Brown argued that while agriculture represents only a small percentage of the state’s economy, California does produce a lot of food for the rest of the nation.

So if you don’t live in California you should still be at least a bit concerned – especially if you consume artichokes, walnuts, plums, celery or garlic. Nearly all those crops – 98 to 99 percent – are grown in the Golden State.

A climate scientist at Princeton told the New York Times in April that planetary warming has made it more likely that the weather would be hotter in California – the thinking is that heat plus lack of rain equal drought.

Several scientists told the Times that temperatures worsen drought by causing more evaporation from reservoirs, rivers and soil, and that the warming trend makes it likely that California and other parts of the Western U.S. will have more severe droughts in the future.

“The 21st century for sure is being characterized by persistent, ubiquitous drought in the West,” Deke Arndt, chief of the climate monitoring branch of the National Climatic Data Center in Asheville, N.C., told the Times, which reported that some studies suggest it is the worst in more than a thousand years. “The projection is for that to continue.”

“For the past two weeks, extreme to exceptional drought (D3-D4) covered two-thirds of California,” the weekly report states.

Meanwhile, Earth Day as usual was accompanied by numerous eye-catching headlines from around the nation.

Here are my favorites – from better to best: