Vehicles with varying levels of self-driving capability will start to become available to consumers as early as this summer and it could then take 20 years for them to be the norm, according to a new report.

The pace will depend in part on acceptance by consumers, regulators and industries including taxis, trucking, personal injury lawyers and insurance that may be disrupted by the change in transportation, according to the report by The Boston Consulting Group (BCG).

The report, titled Revolution in the Driver’s Seat: The Road to Autonomous Vehicles, includes results of a BCG survey of experts and 1,500 U.S. consumers conducted in September that indicates drivers will be motivated to buy self-driving vehicles in part by the promises of enhanced safety and lower insurance costs.

This report is a follow-up to an earlier BCG forecast that self-driving features could represent a $42 billion market by 2025.

This new report by the global consulting firm outlines how the age of the autonomous vehicle (AV) will arrive in stages.

This latest report says the first autonomous feature to become available will probably be the single-lane highway autopilot, with Tesla’s planned introduction in mid-2015, followed by GM’s version of the feature, called Super Cruise, which will appear in 2016 on an all-new Cadillac vehicle.

By 2017, AVs capable of traffic jam autopilot and autonomous valet parking should be on dealers’ lots, followed by highway autopilot with lane changing in 2018.

Vehicles capable of urban autopilot could be ready in 2022, paving the way for fully autonomous vehicles by 2025—the year when Mercedes, for one, expects to debut its first full autonomous model, predicts BCG.

But new entrants from the technology sector could accelerate that timeline and speed adoption — and bring opportunities and challenges, according to the report.

Mass adoption of self-driving technology will bring economic benefits while disrupting business as usual for a wide variety of companies, including original equipment manufacturers (OEMs), mobility providers, and component makers. But, according to Mosquet and his co-authors in the report, mass adoption will not occur until sensor technology and integration software are more fully developed, at a potential cost of roughly $1 billion per OEM. Moreover, vehicles must be made secure from cyberattack, and uncertainty over liability must be resolved, social resistance overcome, and high-precision maps developed.

Assuming those conditions are satisfied, a huge market opportunity awaits, the authors say.

“Our survey of U.S. drivers shows that more than 50 percent of consumers would likely buy a partially self-driving car, and more than 40 percent would buy a fully self-driving vehicle,” says Lara Koslow, an Atlanta-based partner and global leader of BCG’s Center for Consumer and Customer Insight.

The earlier BCG report said the price to add the technology to vehicles will range from $2,000 to $10,000 and will decline in a range from 4 percent to 10 percent in the first 10 years as adoption spreads. 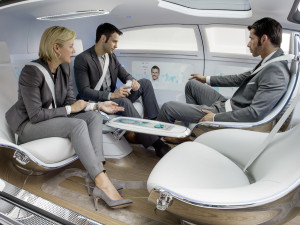 Consumers in other markets, such as China, Germany, and Japan, would be willing to pay even more, according to Koslow.

Despite their general enthusiasm for the AV concept, survey respondents expressed no clear preference for specific autonomous features. OEMs will therefore be challenged to decide which feature or features they should prioritize in their research and development, the authors say.

The consumer survey results show that consumers expect AVs could make driving safer and lower their insurance, repair and maintenance costs. Respondents who said that they would buy a partially autonomous vehicle in the next five years or so cited lower insurance premiums, increased safety, and hands-free highway driving as the leading reasons for doing so, while those who said that they’d buy an AV the next 10 years cited lower insurance premiums and increased safety as well.

“The auto industry is at its most significant inflection in a century,” says Xavier Mosquet, a senior partner and managing director in BCG’s Detroit office, the North America leader of the firm’s Automotive practice, and a co-author of the report. “Self-driving vehicles will hit the road sooner than many people realize. And although the journey to market maturity will take 20 years or more, it’s not too soon for auto executives, regulators and all players in the transportation and tech spheres to start preparing for the sweeping changes on the horizon.”

BCG calculates that OEMs can achieve 25 percent market penetration with a favorable pricing strategy. A higher rate of penetration would require OEMs to reduce the cost of other inputs (such as interiors or power trains) or persuade consumers to pay a higher premium.

“OEMs should act now to capture this massive market opportunity,” says Thomas Dauner, a senior partner in BCG’s Stuttgart office, the global leader of the firm’s Automotive practice, and another co-author of the report. “They should make investment in software their priority. Software accounts for almost 40 percent of the cost of autonomous features, which is nearly equal to the cost of the necessary hardware.”

The report suggests that self-driving “robo-taxis” could revolutionize city driving, allowing consumers in large cities, such as New York, to share a commute with three other passengers not only for less than the cost of a conventional taxi and but even for less than the all-in cost (including subsidies and capital investments) of a subway ride.

AVs may also accelerate the trend toward car sharing and ride sharing, reducing the number of vehicles—and vehicle sales—in megacities, according to the report.

The report draws attention to some of the challenges for automakers, policymakers and insurers coming to terms with the AV disruption.

Vehicle makers might bear a greater share of liability as vehicles become more autonomous. Thus, the authors suggest, policymakers and manufacturers may want to seek risk-limiting measures that could include, for example, capping the liability exposure of manufacturers if they comply with government standards.

Citing the obstacles Uber and other ridesharing firms have faced with taxis and regulators, the report suggests that “negatively affected stakeholders”—including taxi and truck drivers, insurers, and personal-injury and traffic litigation lawyers—”may exert significant pressure on public-policy makers to protect their interests.”

The report says policymakers “may need to develop mitigation strategies to soften the blow on the stakeholders that suffer the greatest disruption.”

Source: Revolution in the Driver’s Seat: The Road to Autonomous Vehicles