Nearly 50 years after Captain Kirk began using his wrist communicator on the television show, Star Trek, wearable technology is taking hold. From Fitbit and Nike Fuelbands to Google Glass and Golden-I, the technology is influencing how people live and work.

While there are many benefits to utilizing wearable technology in the insurance industry, along with the innovation comes risks, according to experts.

Wearable technology refers to miniature electronic devices that are worn under or on top of clothing or are somehow attached to the body. They can even be part of clothing.

These devices are capable of collecting a variety of data including video and audio on the driving, eating, exercise and other habits and behavior of those wearing them and then communicating this data over computers or smartphones to third parties such as insurance companies.

Twenty percent of Americans already own a wearable device and this number is expected to rise quickly, according to a PwC report, The Wearable Future.

Millennials are leading this consumer market, with more than 50 percent estimated to purchase fitness bands next year, while 23 to 40 percent say they will purchase other wearable devices. They are looking for devices to tell them their exercise efficiency (81 percent of people), their dietary and medical info (71 percent), and deals on retail purchases (51 percent).

More than half told PwC that they would be strongly motivated to use a wearable technology if it had a feature to monetarily reward them for using it frequently.

The insurance industry is paying attention.

A survey conducted in 2014 by Strategy Meets Action (SMA), a Boston-based research advisory firm for the insurance industry, found that about three percent of insurers are already using wearable devices and another three percent are experimenting with the new technology, while 22 percent are in the process of developing a strategy for using them. 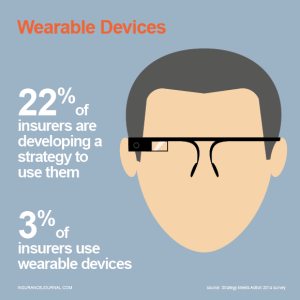 A new survey of insurer executives in nine countries by Accenture found that 63 percent of insurer executives believe that wearable technologies will be adopted broadly by the insurance industry within the next two years, while nearly one-third (31 percent) said they are already using wearables to engage customers, employees or partners.

Tom Benton, a vice president of Research and Consulting in the Insurance practice at Novarica, outlined some key insurance industry uses for wearable technology in a 2014 executive brief, Wearable Technologies and Insurance.

Since wearables capture data near the wearer, providing “a record of what the wearer is seeing and hearing,” they have application in claims assessments. “In such use cases, wearables such as Google Glass can capture video, pictures or audio to document damages to property and take statements from property owners and witnesses,” he wrote.

Wearables can also capture data and provide feedback about the wearer. Benton noted that a Canadian court ruled that FitBit data that revealed a change in activity after a personal trainer was injured in car crash could be used in a personal injury lawsuit.

Dr. Ismail Nabeel, deputy medical director at the Selikoff Centers for Occupational Health, Ichan School of Medicine at Mount Sinai, participated in a Google Glass demonstration recently. Later, from his experience, he identified some of the benefits of wearable devices in a National Institute for Occupational Safety (NIOSH) blog:

“I experienced many advantages to this technology – displaying driving directions, translating multiple languages, providing flight information and reminding me of appointments,” wrote Nabeel. “Wearable technology can be used for working in remote locations, disaster areas and underserved communities. It is possible to transmit information/data/images/scenarios back to other healthcare providers and workers at multiple sites simultaneously.”

Google Glasses could also provide audio or video of the wearer’s whereabouts and driving, including a vehicle or workplace accident scene.

According to Denise Garth, a partner at the research firm, SMA, the wearable device industry is much broader than smart watches and Google Glasses. Devices include a baby pacifier than can monitor a baby’s activities, a wearable tattoo with embedded chips, and even an artificial kidney.

“The contrast is that outside the industry there’s a view that is being adopted much quicker and that there’s a lot more opportunities out there, versus where the industry is,” she said.

Garth considers wearable technology a game changer for the insurance industry with the benefits of using wearable devices appearing in the areas of risk management and return-to-work.

“All of these wearables are really fascinating from the standpoint of helping to, I think, manage or reduce risks. It’s helping to restore people’s health in a faster way by being able to remotely, in a real time basis, monitor them and get them back to work…and then also to be able to manage the overall risk of the individual,” said Garth. 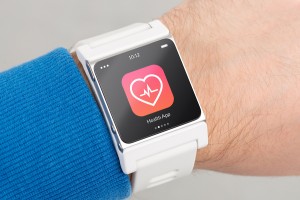 “It really allows a whole different way of monitoring and managing their [injured workers’] recuperation to get them back to work. That lowers claims cost,” said Garth. “That’s the real opportunity there.”

She offered an example where an adjuster wearing Google Glasses could stream information from a loss scene back to home office in order to evaluate the next steps to adjust and resolve the claim.

Claims adjusters at National ConnectForce Claims (NCC) in Alpharetta, Georgia began testing Google Glass in that way last spring. The adjusting company found that Google Glass could have the most immediate impact in its catastrophe division by providing real-time feedback from field adjusters who are on the ground working complex losses.

Matt Anderson, chief operating officer of NCC, believes Google Glass could not only help improve the process of scoping a loss but also the quality of information collected at each loss location. “The end result is improved customer service for both our clients and their customers,” Anderson said.

“We will be able to use this technology for real-time claims and catastrophic event assessments and to assist in training prospective adjusters,” said Michael Hearn, director of operations of NCC.

Wearable technology also offers insurers an opportunity to add value-added services by giving then the capability to engage customers on a more frequent basis, experts said.

“Typically, the only time we hear from an insurance company is when we have to pay our premium or when we have a claim. Not exactly the two best times to interact with you because it’s all about money,” said Garth.

Insurers may need to rethink their business/revenue model so that they are selling services instead of products.

Garth says the insurance industry might look to what is happening in the auto industry, which has seen a lot of change due to technology. Mark Fields, CEO of Ford Motor Co., said Ford needs to move away from the idea that it is an automotive company and toward the concept of being a mobility company delivering an array of services and experiences.

“I think the possibilities are limitless. What we need to do is use our imagination and think about it and rethink the business process and the business model,” said Garth. “If we only limit ourselves to how we do our business today, we’re going to limit the opportunities and the potential.”

Recognizing this concern, technology companies have agreed that the customers will own all data acquired by wearable devices and they will have control over authorizing the use and access of the data, according to Garth.

Assistant professors Apu Kapadia and David Crandall, both at Indian University Bloomington’s School of Informatics and Computing, along with Dartmouth College sociology professor Denise Anthony, have received $1.2 million in new funding from the National Science Foundation to advance their work developing new technologies to improve the privacy of people captured in images taken by certain wearable devices.

“A sudden rise in such image gathering has novel privacy implications for both individuals and society,” Kapadia said. “Our challenge is to understand these privacy implications from both a sociological and technical perspective, and to design new and relevant image and context analysis tools that can help people manage their privacy.”

“These cameras open up all sorts of novel and exciting applications, but so many private images are also going to be collected – images of other people, of sensitive documents, of private emails on computer screens, of private places like homes and offices, even inside bathrooms and bedrooms,” Crandall said. “So we’re investigating computer vision techniques that can automatically find potentially private content in images.”

Image gathering and dissemination for the purpose of gathering family histories and collecting continuous personal information, or lifelogging, is expected to become increasingly popular, the researchers said. A device called Narrative Clip takes 120 photos an hour while Autographer takes 360 per hour. These users and those around them might welcome some control.

“We’ve found that lifeloggers are concerned about their privacy and that of others, yet it’s doubtful they would give up control of their devices to have their images managed by someone or something else without their participation,” Kapadia said. “Here we are moving toward a socio-technical approach where wearers of cameras could express ‘propriety settings’ and thereby reduce the privacy concerns of bystanders.”

As much as wearable devices promise health benefits, they also pose health risks.

Workers using wearable technologies in the workplace could experience headaches, double vision and dizziness, according to Dr. Nabeel of Mt. Sinai. Google Glass could cause distracted driving. As is the case when employees bring their own technology devices to work, employers may have to implement policies restricting the use of wearable devices in order to limit their liability.

Johnson is editor of ClaimsJournal.com.