More than 6.6 million homes on the Atlantic and Gulf coasts are at risk of hurricane storm surge with a total reconstruction cost value estimated to be nearly $1.5 trillion, according to a report released today.

The report from the Irvine, Calif.-based firm examines risk from hurricane-driven storm surge for homes along the Atlantic and Gulf coasts of 19 states and the District of Columbia, as well as for 84 metro areas.

According to the report, the Atlantic Coast has more than 3.8 million homes at all levels of risk of storm surge this year with a reconstruction value of $939 billion, and the Gulf Coast has nearly 2.8 million homes at risk and nearly $549 billion in potential exposure to total destruction damage. 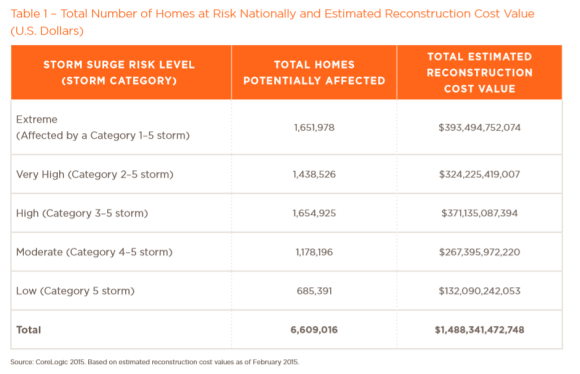 Tom Jeffery, senior hazard risk scientist for CoreLogic, said the report points to a major, and pervasive, trend that insurance professionals should be concerned about.

“Unfortunately for some of the homeowners, there is still building in the coastal areas that are still at risk,” Jeffery said.

Because each year’s report has more refined data, Jeffery said it’s difficult to make an “apples-to-apples” comparison to reports from years past. However, anecdotally 2015 looks to be on par with last year, he added.

“We’re seeing numbers that are relatively close to last year,” Jeffery said. “We know there’s a lot of risk out there.”

It could end up being a quieter year for the Atlantic and Gulf Coast states if it a strong El Niño continues to develop, leading to a likelihood of less severe and fewer storms in that part of the world, the report shows.

“This El Niño that seems to be strengthening may lead to a reduced opportunity for hurricanes, so it would tend to have a reduction in the number of hurricanes and the strength of hurricanes in the Atlantic,” Jeffery said.

Australia’s Bureau of Meteorology in late May cited indexes of sea-surfaces temperatures that showed the El Niño taking hold across the Pacific has strengthened.

While the CoreLogic report shows that Louisiana has the second most homes at risk of storm surge, only one-fourth of those properties are in the “extreme” or “very high” storm surge categories, which is an improvement that the report credits to the upgrades and expansion of the levee system in Louisiana.

“After Hurricane Katrina in 2005, upgrades were planned for the network of levees and pumping stations to reduce the potential devastation from future storms,” Jeffrey said. “Upgrades were completed in 2013, and CoreLogic analysis shows a significant number of homes are now protected from all but the higher category hurricanes as a result.”

For the entire U.S. the report shows there are more than 1.6 million homes at “extreme” risk from storm surge, while 1.4 million properties are at “very high” risk.

Those are big numbers to look at, Jeffery acknowledged.

To drive home the most important point that he thinks insurance professionals should take away from the report, Jeffery used as an example the Tampa-St. Petersburg-Clearwater, Fla. region.

The area has been much talked about among storm watchers because there hasn’t been a storm equal to or greater than Category 3 in more than 90 years. However, when a big storm does hit, the potential impact of just one such event is worth considering, he added.