Many property/casualty insurance carriers have focused their charitable efforts on veterans, and they’ve done so for a number of good reasons.

One important reason for adopting veterans causes was explained by Glenn Elmore, director of sales training for Combined Insurance, a Chubb company.

“I think that by giving back to those folks, in return hopefully we get more military veterans as employees,” he said.

In other words, it’s easier to recruit veterans if that group ranks high on your list of charitable causes.

Combined Insurance has a strong interest in hiring veterans. Elmore himself is a veteran. He was a gunner’s mate first class in the U.S. Navy and a rescue swimmer from 1998 to 2007.

“There’s quite a few of us … in the organization that can stand up and say, ‘This is who we are and this is who we gave back to this year,'” he said.

The company likes to hire veterans because they are used to structure, they are disciplined and are trained to excel at a high level, Elmore said.

Elmore’s sales program, for example, puts people in a highly structured learning environment, which is just what military personnel thrive in.

Veterans are also highly adaptable thanks to their experience in the service, he said.

“They’re very comfortable in a changing, new environment,” Elmore said. “When you’re in the military, you go someplace new every three years, aside from all deployments in-between.”

The industry’s interest in veterans isn’t new. San Antonio, Texas-based USAA, which was founded in 1922 by a group of U.S. Army officers, is almost synonymous with veterans, noted Russell Lee, an executive at a competing carrier.

“Their whole business model is obviously geared toward people who are in the military,” said Lee, the vice president of product management for Los Angeles-based Farmers Insurance. “This has always served as a model.”

Farmers has made veterans a target market in more than one way and for good reasons.

“They self-selected to join the armed forces, to defend the country,” he said. “That says a lot about a person’s character. We’ve seen great success with insuring those folks at Farmers.”

Because most veterans are considered reliable and trustworthy, he believes they make great policyholders, who in turn might be attracted by the company’s charitable deeds for veterans.

“I think a lot of insurance companies that know that reach out and want to give back,” he said.

“Our veteran agency owners … they do really well as Farmers agents,” Lee said.

Lee grew up with both parents in the U.S. Army, and he served from 1996 to 2005, and then left the service at the rank of captain.

When Lee was discharged, one of the first things he realized was he needed nice clothing — as he mostly wore uniforms for all of those years.

“I was institutionalized,” he said. “When I was transitioning at the age of 30 into the civilian world, I had no idea what I was doing.”

He had to go to a civilian friend to ask for help. They went to Dillard’s department store in search of dress clothes.

“I probably spent over $1,000 that day,” he said, adding that the hefty spend only got him two suits.

So when Farmers launched its Suits for Soldiers program, which aims to collect 50,000 suits to help make veterans’ transition into the civilian workforce easier, he was on board immediately.

“This is a great opportunity for people to donate gently used suits,” he said. “It’s a really easy way to support veterans.”

Like the others, he said veterans make good employees thanks to the skills and training they get in the military.

Claims representatives often handle multiple claims at a time, so they need excellent organization abilities as well as good communications and analytical skills, he said.

“I think all those are skills that individuals learn and gain in the military, and the vast majority of them apply those skills to claims roles and other roles at Progressive,” said Oppenheim, whose son Michael served in the U.S. Marine Corps from 2003 to 2008, including a deployment to Iraq.

One of Progressive’s pet programs is Keys to Progress, which provided refurbished vehicles to military families on Veterans Day.

Progressive teamed up with Enterprise Rent-A-Car, which provided six months of automobile insurance through Progressive for each donated vehicle.

“That way, when the recipients drive away from our facilities, everybody feels better about that,” Oppenheim quipped.

That’s just three carriers among a sea of insurers that have long been recognized as among the country’s most military-friendly firms, devoting large portions of their budgets to hiring veterans.

The P/C industry has often struggled to compete with other industries for recruits. Insurance executives and consultants have blamed this situation on a poor reputation, lack of appeal of insurance careers among high school and college students, and a limited pool of trained talent.

At least one of those issues maybe readily fixable. There’s a big pool of veterans.

According to the latest data available from the Bureau of Labor Statistics, 21.2 million men and women were veterans, accounting for roughly 9 percent of the civilian population age 18 and up.

Following is a sampling of charitable acts toward veterans from carriers. It wasn’t possible to include all the carriers that support veterans, nor all of each carrier’s charitable giving to veterans.

The Insurance Industry Charitable Foundation consists of many insurers giving time and money to charitable causes. During the IICF’s 2016 Week of Giving, industry volunteers in the Southeast Division engaged in cleanup and repair service projects at veterans cemeteries throughout Texas. Activities included cleaning headstones and gardening. 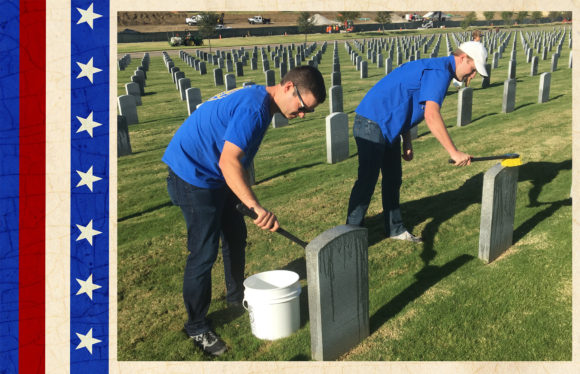 The IICF’s annual Week of Giving each October brings together industry professionals for a week-long series of volunteer projects.

USAA and the non-profit PsychArmor Institute in September unveiled the “School for Military and Veteran Caregivers and Families,”an online program that covers a range of subjects that military and veteran caregivers identified as educational needs.

The courses cover a range of subjects that have been identified by military and veteran caregivers as educational needs. One course is titled “Understanding Invisible Wounds of War at Home,” which is comprised of seven online sessions that educate caregivers on supporting those with injuries like post-traumatic stress disorder, depression and substance abuse.

Progressive Insurance and Enterprise Rent-A-Car for the past four years have helped support military members and their families as part of the annual Keys to Progress program. The one-day event this year provided more than 100 newly refurbished vehicles to military families across the country on Veterans Day.

Enterprise Rent-A-Car provided six months of automobile insurance for each donated vehicle through Progressive and helped transport families to the giveaway events as needed. The vehicles were fully restored as an extension of the National Auto Body Council’s Recycled Rides program, an industry-wide collaboration to repair and donate vehicles to those in need. The vehicle giveaways took place at 63 locations across the country, including Progressive’s service centers. 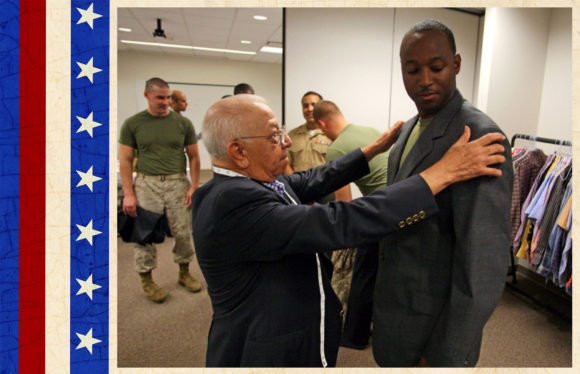 The program helps people across the country support veterans by donating gently used and dry cleaned suits or professional attire at Farmers agencies. It was launched at a kick-off event in Southern California, during which Los Angeles Mayor Garcetti declared October 18 “Suits for Soldiers Day.” 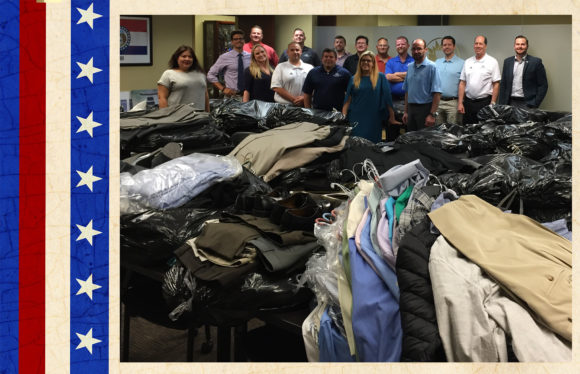 Farmers, in creating the initiative, cited Department of Defense statistics that show more than 1 million military personnel will be making the transition from the military in the next couple of years, many of whom may not own appropriate business attire to go to networking events, interviews or work. Farmers’ goal is to collect 50,000 suits.

Combined Insurance, a Chubb company, recently sponsored a No Dough Dinner, a year-round program that offers a free, hot meal to military and military families. 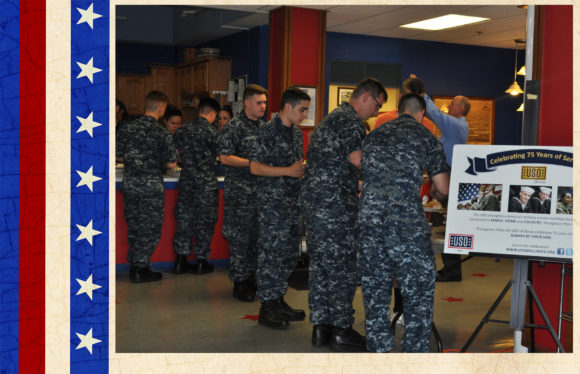 During an event hosted by the USO of Illinois, Combined Insurance volunteers served meals to more than 350 military personnel and their families at the USO Great Lakes Center on Naval Station Great Lakes. 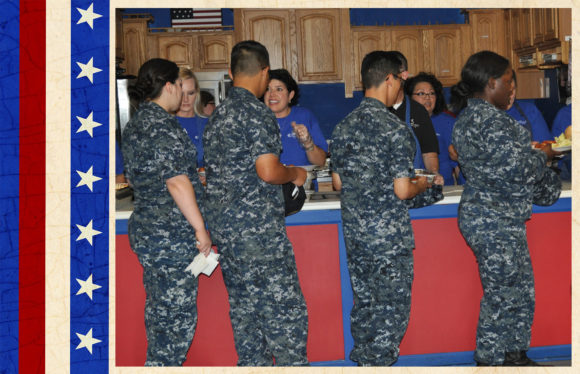 USO No Dough Dinners are normally served the evening before a military pay day, when funds for service members and their families may be running low. All of the No Dough Dinners are funded by companies, clubs or other organizations who then provide the volunteers to serve the food on site.

Many of the military personnel that utilize the USO Great Lakes Center and come to the No Dough Dinners are junior sailors attending military specialty schools on the Naval station, but all branches of military service are welcome. 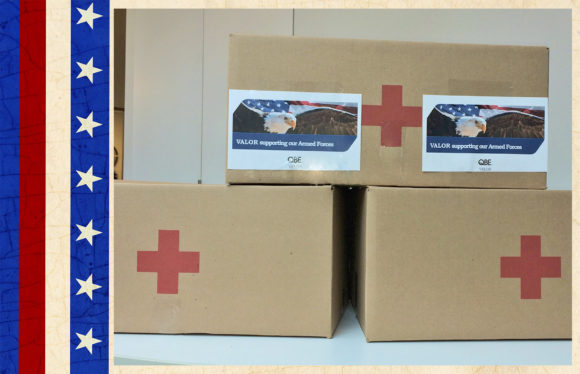 Valor was created in 2013 to serve as an internal source of information about veterans and reservists who have served in the armed forces within QBE North America. Valor promotes QBE North America as an employer of choice to veterans in the communities where they do business.

Editor’s Note: February is Insurance Careers Month, a time to rally young insurance professionals around the world to “share pride in their careers and stimulate interest in the industry among their peers.” First organized in 2016, the objective of Insurance Careers Month is to encourage carriers, brokers, agents and industry associations to plan their own outreach to young people to help spread awareness of the diverse career options that insurance offers.

Here’s more on how military veterans are making it in insurance careers: