According to The Hartford Home Fire Index, which ranks 100 cities based on their home fire risk, the top five highest risks are: Detroit, Mich.; Shreveport, La.; Boston, Mass.; Flint, Mich. and Richmond, Va.

The index is based on an analysis of the U.S. Fire Administration’s National Fire Incident Reporting System (NFIRS) and a survey conducted by The Hartford on fire safety and prevention behaviors among the general population. The Hartford is promoting the index in conjunction with awarding $2 million in fire safety grants i celebration of the 70th anniversary of its Junior Fire Marshal Program, which is one of the country’s oldest corporate-sponsored public education programs.

The fire safety funding and resources will go to local school districts and fire departments in the 100 U.S. cities identified in The Hartford’s Home Fire Index. In addition, the company will provide educational materials to 1.5 million children in kindergarten through third grade.

“Since The Hartford’s beginning as a fire insurance company more than 200 years ago, we have been committed to fire prevention and safety,” said The Hartford’s Chairman and CEO Christopher Swift, citing the legacy of the Junior Fire Marshal program. “Our goal is to empower everyday kids to become everyday heroes by providing them with the tools and training to reduce fire risk in their homes and be safe.”

A home fire is reported in the U.S. every 86 seconds and 33 percent of home fires are started by children 6-9 years old, according to the insurer.

Over the next three years, The Hartford is making a $2 million donation and commitment to the following: 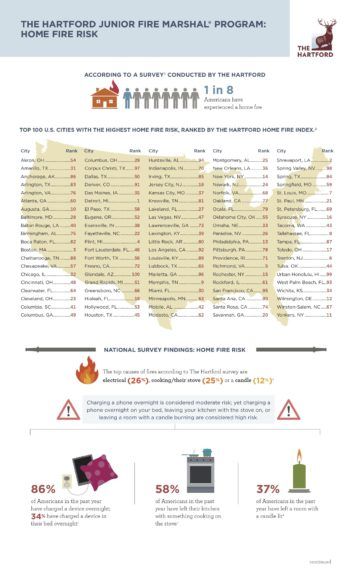