Arizona, Utah, North Carolina and Minnesota saw the greatest premium spikes of 29 percent, 27 percent, 19 percent, and 16 percent, respectively. The positive news reported from each of these state’s executive directors were that the increases were attributed from market changes in property and construction, new/improved business technology platforms, and policy increases in premium. 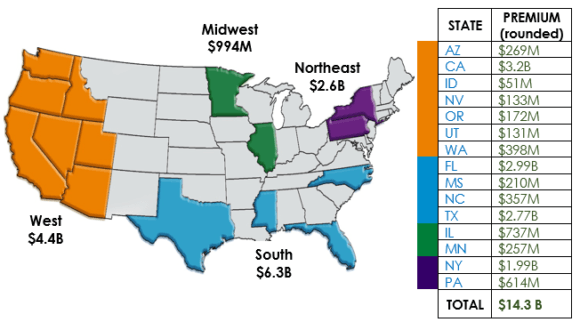 California, Florida, Texas and New York all saw increases in premium volume ranging from 5 to 8 percent. These four offices represent much of the U.S. premium volume, totaling $10.9 billion of the total $14.3 billion mid-year value. This concentration is largely due to the size and regions they represent, as well as the populous and business demography of their states.

As with most states, Florida’s surplus lines premium continues in an upward trend.

“The primary factors of our 6 percent growth for the first 6 months of 2017 are an improving economy, particularly in housing, and the fact that more policies written are being renewed rather than re-entering the admitted market at the end of the period,” Gary D. Pullen, executive director of the Florida Surplus Lines Service Office, said in the SLTX announcement.

Overall, the 2017 mid-year review provides a good snapshot. The industry is experiencing growth in almost all regions across the U.S. Albeit soft market conditions, stability is an added factor that is as valuable in what remains to be seen for the remainder of 2017 and beyond, SLTX said.