Tropical Storm Nate, which has already shut oil and gas platforms in the Gulf of Mexico, strengthened as it continued north on a path that’ll bring it ashore in the U.S. by week’s end.

Nate was about 115 miles (185 kilometers) northeast of Isla Guanaja, Honduras, with top winds of 45 miles an hour, the U.S. National Hurricane Center said in an advisory at about 8 a.m. New York time. The storm’s forecast track has it scraping the eastern edge of Mexico’s Yucatan Peninsula before becoming a hurricane by the time it reaches the northern Gulf of Mexico on Saturday.

Fourteen storms have already formed across the Atlantic so far this hurricane season, killing hundreds of people in the U.S., Mexico and the Caribbean and causing an estimated $300 billion in damage. In August, Hurricane Harvey temporarily shut down about 25 percent of oil and natural gas production in the Gulf and as much as 20 percent of U.S. refining capacity. A few weeks later, Hurricane Irma devastated Florida citrus groves.

Nate is set to roil commodities markets once again by halting oil and gas output in the Gulf and threatening orange and cotton crops. Orange-juice futures rose Thursday. BP Plc to Chevron Corp. were evacuating and shutting platforms on Thursday ahead of its arrival, while Phillips 66 is said to reduce refining rates at its Alliance plant south of New Orleans.

As of 8 a.m. New York time Friday, a hurricane watch was in place for Morgan City, Louisiana, eastward to the 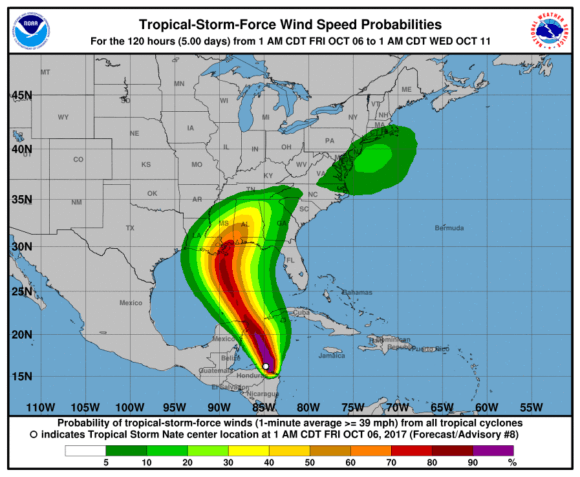 While energy production may be curtailed, the storm probably won’t be strong enough to do any lasting damage, Matt Rogers, president of the Commodity Weather Group LLC in Bethesda, Maryland, said earlier on Thursday. “The track looks a little ominous, but the intensity is under-performing. That is the reason why we may not get big problems out of this,” he said. 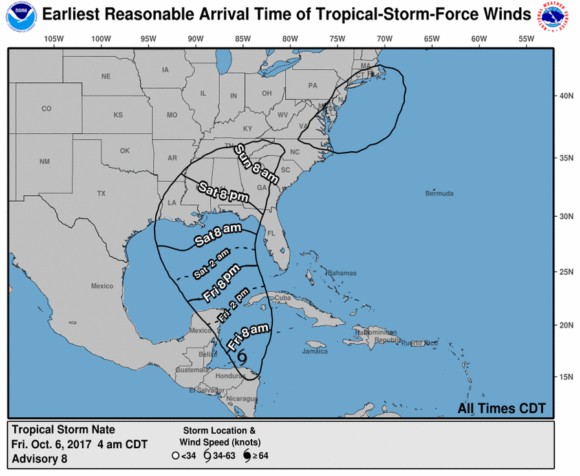 Depending on where Nate ultimately comes ashore, it could mean trouble for citrus farmers in Florida, the world’s second-largest orange juice producer, still reeling from Hurricane Irma last month.

The system “definitely” poses a risk to U.S. cotton-growing areas, particularly western portions of the Southeast including Alabama and Georgia, Donald Keeney, senior meteorologist with MDA Weather Services in Gaithersburg, Maryland, said in a phone interview. Georgia is the second-largest cotton producer after Texas.