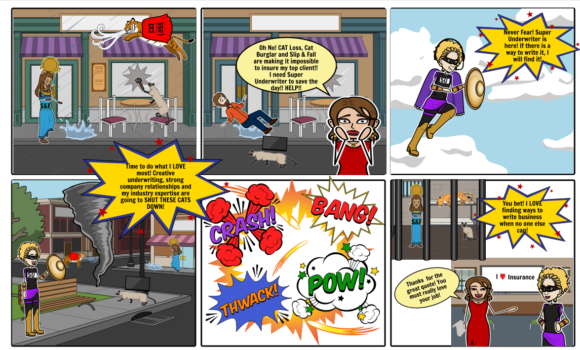 Insurance underwriter Aubrie Hoopingarner says she wound up working in insurance the same way many people in the industry start their careers, she “kind of stumbled into it!”

Now, nearly a decade into a successful career with Portage, Michigan-based managing general agent and surplus lines broker J.M. Wilson, Hoopingarner was picked as the winner of Insurance Journal’s inaugural “What is the Coolest Part of Your Job?” Contest. It’s an honor she says she is thrilled to accept.

“I absolutely love my job,” Hoopingarner said. “The best feeling is when I have one of my agents come to me and it’s the eleventh hour, they are down to the wire, and they need the quote as soon as possible. When I am able to find them a quote and get them a policy for their client, it is the best.”

Indeed, Hoopingarner’s winning entry for Insurance Journal’s contest featured Hoopingarner as a super hero – or Super Underwriter – fighting bad guys like Cat Loss, Cat Burglar and Slip & Fall to get the quote and help the client in a comic strip she created.

While Hoopingarner doesn’t don a cape or take flight for her daily “adventures” as an insurance underwriter, she says she loves diving into the interesting risks that come across her desk.

“I thrive on how every day is different and you never know what will come up,” she said.

Hoopingarner has been with J.M. Wilson since she took a temp job processing policies for the company in Michigan nine years ago. Not too long after, she was hired on full-time and then later promoted to underwriter. Three years ago, J.M. Wilson decided to open an office in South Carolina and Hoopingarner jumped at the chance to move South.

She is now a senior underwriter specializing in garage insurance. She said she picked that niche because she wanted to do something out of the ordinary.

“Insurance is what you make it and I think it’s cool. I try to make it cool, but like any other job it can be boring if you let it. It’s all about your attitude,” she said. “I see some really interesting things and it’s different and I love that.”

Hoopingarner keeps a positive attitude and likes to have fun in the office and with clients, but she also understands the importance of her job. She said most people don’t understand how important insurance is.

“One of our VPs always emphasizes how the world wouldn’t run without insurance – and it really wouldn’t. I wish people would stop and think about that, I think they take it for granted,” she said.

She said most young people aren’t aware of the opportunities and experiences available in the industry, and how challenging and satisfying the work can be.

“There is a stigma that it is all old people in the business and not a lot of young people, and I wish people would realize that you can be in your 20s and 30s and have a job in insurance,” she said. “It’s a lot of fun and you learn things that you couldn’t in a different job.”

She thinks the industry, particularly carriers, could do more to recruit young people into insurance careers in ways they will respond to, such as on social media.

“That’s why I think the [Insurance Journal] contest was so good because it was geared towards younger people instead of just everyone in insurance,” she said.

Offering training programs or financial assistance to achieve insurance designations would also be a good way to recruit younger people into the industry, she said.

But most important, the industry needs to lighten up, she said.

“Getting down to [young people’s] level, and relaxing a little would help. The industry can come across a little stuffy – it is insurance. But more companies need to make a point that this is fun, and we want you to join our team and loosen it up a little,” she said. “I think it would really help attract young people into this business.”

Hoopingarner’s submission to the Insurance Journal contest was one of 66 entries by agents under 40-years-old answering the question “What is the coolest part of your job?” without any spoken words. The contest was put on in partnership with the Insurance Careers Movement (ICM), a collaborative, cross-industry initiative to promote career opportunities in risk management and insurance. More than 850 insurance carriers, agents/brokers, trade associations and industry partners are currently involved in the ICM.

Hoopingarner’s comic strip entry was selected from a drawing on Dec. 4 on Facebook Live. As winner of the contest, Hoopingarner received an Amazon Alexa and a one-year membership to the Insurance Journal Academy of Insurance.

Education, Hoopingarner said, is crucial to helping young people get started in the industry. She tries to be a resource to new people because she knows how overwhelming it can be. She said she works on educating and training her newer colleagues, and plans to use the Academy of Insurance’s offerings to help in those efforts.

Her advice to young agents is to be patient and reach out if help is needed.

“When I first started underwriting I was scared to death of my first bind and if I got it right. It takes awhile to get comfortable and you are not going to know everything when you just start,” she said. “It’s a process and it takes time. Don’t be afraid to ask questions… there is a lot to understanding insurance and you won’t know it all right away.”