Mergers and acquisitions of insurance agencies last year broke all records in 2017, according to OPTIS Partners’ annual report. The OPTIS database recorded 604 deals in the United States and Canada in 2017, a 31 percent jump from 461 in 2016.

“This whopping increase exceeded expectations,” said Timothy J. Cunningham, managing director of OPTIS, an investment banking and financial consulting firm specializing in the insurance industry. “We expect the beat to go on in 2018.”

“The concentration of PE /hybrid buyers has grown steadily since we began tracking deals in 2008 when only four of the top 10 buyers had private equity backing,” he said.

The 2017 report lists PE/hybrid as a new buyer category. It includes all private-equity-backed buyers plus certain privately owned buyers with material internal or external financial support for acquisitions.

The top five buyers were Acrisure (92 acquisitions), Hub International (49), Alera Group (38), Broadstreet Partners (32) and Gallagher (30). All were in in the PE/hybrid category except publicly owned Gallagher.

By seller type, property/casualty-focused agencies dominated the list. They accounted for 301 of the 2017 transactions, 49.8 percent of the total.

Employee benefits brokers accounted for 174 transactions, 28.8 percent of the total, nearly a 90 percent increase from 2016.

“The explosion in employee benefits agency sales was fueled by Alera, Acrisure, and several other active acquirers,” Cunningham said.

There were 43 sales in the “other” category, which includes managing general agents, third-party administrators and other types of sellers. 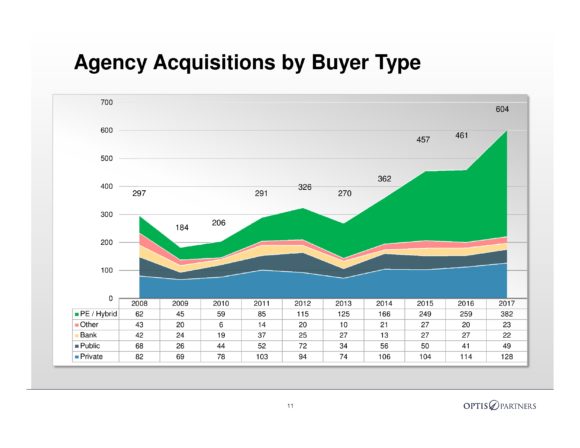 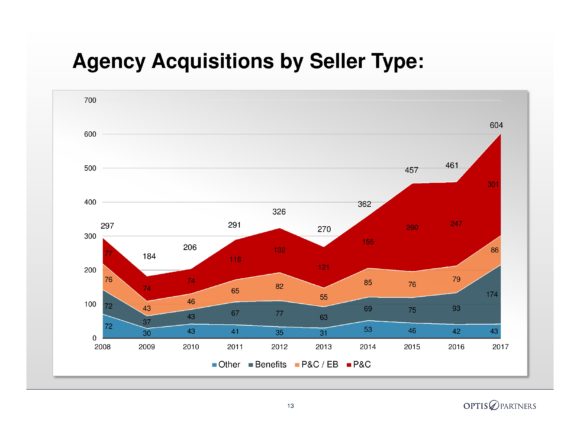 The statistics pointed to these lessons, according to Daniel P. Menzer, partner:

The actual number of sales was greater than the number reported, as many buyers and sellers do not report transactions, and some acquirers do not report small transactions, Cunningham said. However, he said, the OPTIS database tracks a consistent pool of the most active acquirers, including other announced deals, to provide a “reasonably accurate indication of deal activity in the sector.” 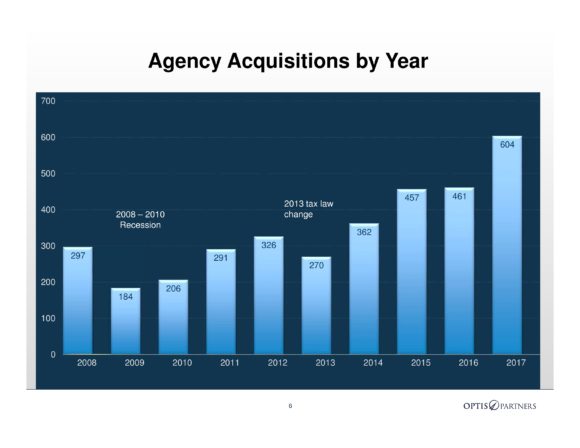