After one of the most active years for mergers and acquisitions in property/casualty and life insurance, market conditions point to a continued push for deals, according to analysis by S&P Global Market Intelligence.

Through the first nine months of 2018, the $39.1 billion in aggregate transaction value ranks as the most active year for insurance M&A since 2015. It is already the second most-active full calendar year after adjusting for inflation since 2005, and the second-busiest year in terms of unadjusted aggregate deal value since 19981. S&P Global Market Intelligence estimates deal value full-year 2018 will increase by approximately 150 percent from 2017 to more than $44 billion.

“We are in a period where insurance carriers are reevaluating what is core to their franchise and pushing for greater efficiency in both expenses and capital utilization, which in turn is driving deal volume close to record highs,” says Tim Zawacki, senior insurance analyst at S&P Global Market Intelligence said. “With a continued push for consolidation even after one of the most active years for P/C and life insurance M&A, a variety of factors will continue to drive transaction deal value beyond 2018.”

Federal tax reform and continued inbound interest from international acquirers were key drivers of in growth for M&A appetite, despite protectionist political rhetoric, excess capitalization, and strong interest by private equity-backed buyers. The re-emergence of AIG as a consolidator coupled with increased strategic investment in insurtech startups by established carriers rounded out the primary factors that fueled M&A growth.

Zawacki added that “uncertainty about the future of the auto insurance business” may be a driver of consolidation in the near term. S&P projects that the private and commercial auto business will account for 43.3 percent of the U.S. P/C industry’s total premium writings in 2018. 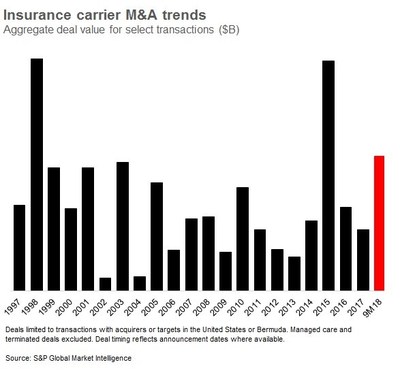 From a longer-term perspective, factors such as the rise of the sharing economy, the development of fully autonomous vehicles and the broader adoption of advanced vehicle safety technology create questions about the sustainability of this critical component of the P/C industry’s income.

Carriers have already begun to respond to disruption by using M&A to broaden the scope of the products they offer and to enhance their level of specialization within certain niches.

S&P will present additional M&A analysis at its annual M&A symposium on Oct. 17-18 in New York.