Fewer injured workers are receiving opioids to treat pain than in previous years, as medical providers are turning more to non-opioid medications and physical therapies.

A new study of injured worker claims from 27 states by the Workers Compensation Research Institute (WCRI) finds that both treatments using non-opioid pain medications such as NSAIDs and non-pharmacologic treatments such as physical therapy have been increasing, with the non-pharmacological remedies gaining the most.

However, despite declines, opioid prescribing continues to be prevalent among nonsurgical claims with more than seven days of lost time and there remains substantial interstate variation in opioid dispensing, the study found.

The study, Interstate Variations in Dispensing of Opioids, examined interstate trends in the prescribing patterns of opioids, pain medications, and other pain treatments across 27 state workers’ compensation systems covering data from October 2011 through March 2018.

“Opioid overdose deaths continue to be a top public health priority in the United States. This priority is shared by the workers’ compensation community, as injured workers are commonly prescribed opioids,” said John Ruser, president and CEO of WCRI. “This report informs policymakers and other stakeholders about changes in the way that injured workers are being treated for pain in workers’ compensation systems, and provides information to monitor the impacts of ongoing policy changes.” 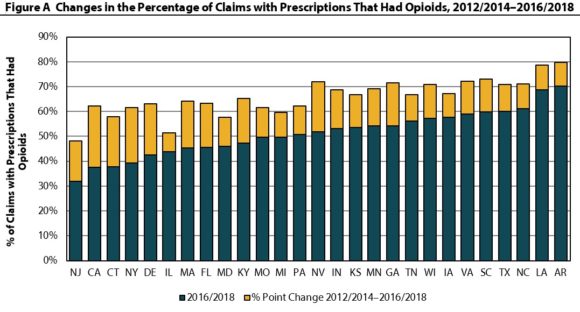 In states where a higher proportion of claims had a first opioid prescription exceeding 7 or 14 days of supply, the chronic opioid use rate was also higher, which means injured workers were more likely to receive at least a 60-day supply of opioids over any 90-day period.