First, Hyundai Motor Co. made headlines about its electric cars catching fire. Five days later, it was General Motors Co. and Ford Motor Co. The next day, it was BMW AG.

Vehicles going up in flames aren’t new to the electric era. An estimated 171,500 took place annually in the U.S. alone over a recent three-year period, and cars powered by the combustion of gasoline are plenty prone to catching fire. But the issues affecting some of the world’s largest automakers over the past week are both a reflection of plug-in models taking off in the market and a threat to more widespread adoption.

The vehicle blazes are making a big impact before automakers have even managed to pin down their precise causes. A flaw affecting a plug-in hybrid SUV in Europe will keep Ford from complying with tougher emissions standards this year. BMW and Hyundai are recalling tens of thousands of cars, and GM is being probed by U.S. safety regulators.

“What we’re seeing with new fires has more to do with the landslide of new EV models and higher sales in the last couple of years — there are more fires because there are more EVs,” said Sam Jaffe, managing director at Cairn Energy Research Advisors, a Boulder, Colorado-based consultancy. “Automakers are safety engineers first, performance engineers second, so I expect every automaker will react to any fire with tremendous care.”

While EVs don’t invoke the same instinctual distrust as self-driving cars or flying taxis might, they do require a leap of faith for some consumers. A younger, tech-savvier population is one reason why China is the world’s biggest EV market, Jato Dynamics analysts said in a report earlier this week, with consumers in Europe and the U.S. more likely to stick with what they know.

Around the world, engineers are still tinkering with the complicated chemical cocktail that goes into EV batteries. They’re in a global race to make them cheaper, lighter, and more powerful — one that some analysts warn could come at the expense of safety.

“Pursuing a higher battery density will normally mean you need to sacrifice safety,” said Toliver Ma, a Hong Kong-based analyst at Guotai Junan Securities Co. “It’s long been a problem that hasn’t been solved. Battery makers are wanting to put out batteries that have a long driving range, because that’s what automakers demand.”

Hyundai’s problem that started off automakers’ recent spate of EV woes involves its Kona model. The Korean carmaker is calling back more than 25,000 of the compact sport-utility vehicles because short circuits caused by a battery cell manufacturing defect could cause fires after they charge. Its supplier, LG Chem Ltd., said the exact cause of the fires haven’t been determined. 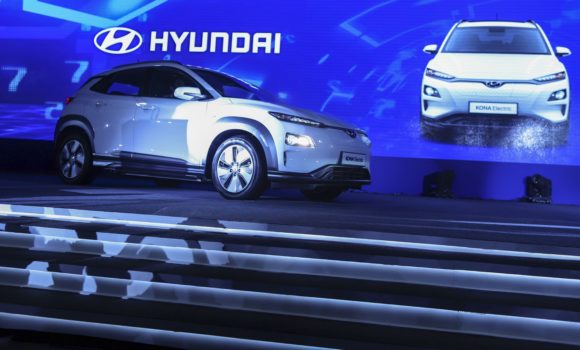 Four days after South Korea’s land and transportation ministry announced the safety campaign, Hyundai said it was reviewing whether the issue warrants a global recall.

The next shoe to drop was the U.S. National Highway Traffic Safety Administration’s announcement it’s investigating whether GM’s Chevrolet Bolt EV is prone to catching fire when parked. GM said it’s cooperating with the inquiry and conducting its own probe.

Ford’s malady involving its Kuga SUV for now appears to be the most consequential of the bunch. The automaker is delaying the U.S. launch of the mechanically similar Escape plug-in hybrid to next year over the risk of recharging fires.

The plug-in hybrid version of the Kuga was pivotal to Ford complying with the European Union’s tougher limits on carbon-dioxide emissions this year. The automaker said it will fall short of complying with the standards and try to pool its fleet with another manufacturer to avoid paying a fine.

BMW still expects to hit its CO2 targets this year despite a stop-sale of several plug-in hybrid models in Europe and the U.S. — the X1, X2, X3 and X5 SUVs; the 2, 3, 5 and 7 Series cars; and its Mini brand’s Countryman model. It’s recalling roughly 27,000 vehicles worldwide over risks their batteries can overheat and catch fire. 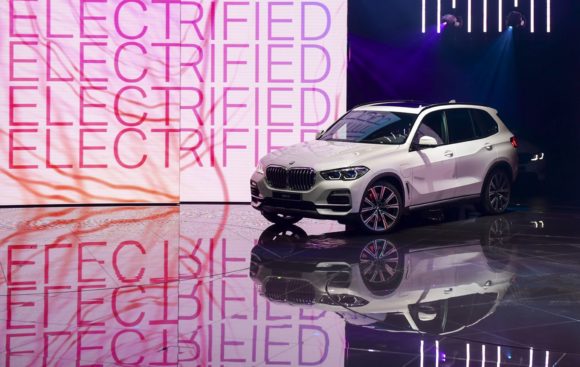 The recent spate of fires follow another round last year in greater China. NIO Inc. said in April 2019 that one of its ES8 vehicles caught fire in the northwestern city of Xi’an while being repaired, while a video on Chinese social media platforms showed a Tesla bursting into flames in a Shanghai garage.

“Batteries are a dance of optimization between a myriad different design, cost, safety, and performance factors,” said Vivas Kumar, a principal consultant at industry adviser Benchmark Mineral Intelligence and previously a member of Tesla Inc.’s battery supply chain team. “If this trend of recalls due to fires continues, it will force OEMs to consider an increased emphasis on safety by foregoing progress on some of those other elements.”

The heightened sensitivity around battery safety could impact efforts among producers to boost performance, as well as driving range between recharging, by using more nickel in place of cobalt, according to Alice Yu, a Beijing-based analyst at S&P Global Market Intelligence.

The nickel heavy so-called NCM 811 battery cathode configuration is one of the most popular, adopted first by Panasonic Corp. and now mass-produced by Contemporary Amperex Technology Co. Ltd., a supplier to Tesla. It’s 80% nickel, 10% cobalt and 10% manganese, and has a longer lifespan, allowing cars to travel further on a single charge.

“Manufacturers are trying to increase energy density, so having more nickel and less cobalt, that increases the risk of having less thermal stability,” Yu said. “Having these incidences will hold back the manufacturers’ moves to improve energy density, and make them more cautious.”

–With assistance from Tian Ying, Keith Naughton and Gabrielle Coppola.