The number of noticeable earthquakes has been increasing year after year since 2017 in the key oil producing regions of the U.S., according to an analysis by an independent energy research firm.

The analysis of seismic activity by Rystad Energy reveals that tremors of above the magnitude of 2 on the Richter scale quadrupled in 2020 and are on track to increase even further in frequency in 2021 if oil and gas activity sticks to its current drilling methods at the same pace.

The oil and gas industry is contributing to the increased seismic activity through its practice the saltwater disposal through underground injection, Rystad reports.

The research, which examined data from Oklahoma, Texas, Louisiana and New Mexico, showed that earthquakes of above the given magnitude accumulated to a count of 242 in 2017, growing to 491 in 2018, 686 in 2019 and 938 in 2020. Around 570 such tremors have been recorded through the first five months of 2021, meaning we may see a new record this year if the trend continues.

The trend appears to be moving not only to more frequent, but also larger events, the report says. So far this year, the analysts said there have already been 11 individual seismic events of magnitude 3.5 or greater, which can certainly be felt but may not cause any damage. They said this is a “worrying sign” compared to just six such events annually in 2018 and 2019, and 14 events in 2020.

Rystad said the biggest oil and gas industry contributor to seismic activity is by far the saltwater disposal through underground injection, according to the report, and the volume of disposed water climbed sharply from 2011 through 2019,. It then tapered off a little in 2020 due to lower activity caused by the Covid-19 pandemic. 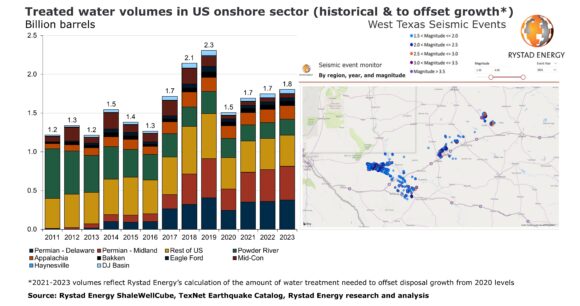 Ryan Hassler, shale analyst at Rystad, said that the cost of maintaining water disposal at 2020 levels and offsetting its coming growth could be more than $1 billion annually for oil and gas producers, although the cost will vary by region.

Hassler added that earthquakes are not the only environmental issue caused by water disposal. “Fresh water sourcing in arid regions of West Texas and New Mexico threaten the water supply of local communities and essential agriculture activities, while environmental concerns surrounding the chemical composition of produced water serve only to fan the flames of public antipathy,” he said.

Rystad Energy estimates that by the end of 2022, the Permian Basin (western Texas and southeastern New Mexico) – including both the Delaware and Midland sub-basins – could be able to meet between 40% and 43% of frac water demand from recycled produced water. To meet this target, additional investment from the midstream space will be required to drive costs down further.

Hassler said there are ways to alleviate the growing pains of the recycling infrastructure and the disposal seismic problem. While there are several avenues in which produced water can be reused from an agriculture, irrigation or wildlife standpoint, not all states are currently taking advantage of them. Texas is now allowing the Texas Commission on Environmental Quality to take responsibility for the permitting of produced water surface discharge for beneficial reuse. Rystad says this change should allow for a more streamlined permitting process, enabling operators to discharge produced water volumes into surface water to be beneficially reused for agriculture or wildlife. However, Rystad reports, this does not appear to be the case, as the Texas commission has yet to administer a single permit since taking over responsibilities.

Currently, only Wyoming takes advantage of surface water discharge for beneficial reuse under law, providing an additional market for water reuse. California, on the other hand, uses produced water for crop irrigation.