For the second time this month, a personal auto insurance giant devoted an investor conference to the topic of rate hikes, with Allstate executives also assuring listeners the carrier has various other tools to return to profitability.

“Looking back to similar challenging environments, ….we have a demonstrated track record of addressing past profit challenges,” Mario Rizzo, chief financial officer of Allstate, said during a special event last week, describing how the auto insurer put through rate jumps that translated into $2.5 billion back in 2015 and 2016 when rising auto frequency damaged underwriting profits.

Now tackling an auto severity problem tied to the rising repair and replacement costs and social inflation, Allstate has achieved 41 rate increases averaging 7.8 percent each across 34 locations since the beginning of fourth-quarter 2021, which will bring $1.2 billion of additional estimated annual premium written onto Allstate’s books, according to Glen Shapiro, president of Allstate’s property-liability business, and Julie Parsons, chief operating officer. (The figures refer to the Allstate brand alone. Allstate also disclosed rate changes for the National General brand to investors but did not discuss them during the event.) 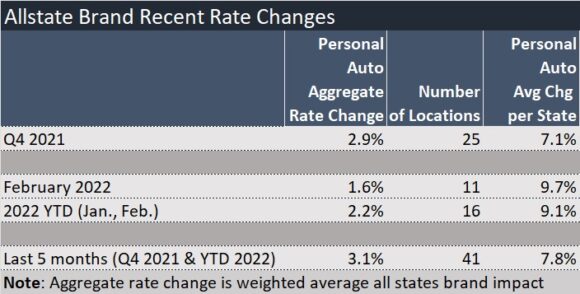 “Increasing rates is definitely core to restoring margins, but we can moderate the impact for customers through claims excellence and reducing expenses,” Shapiro said, echoing commentary from executives of Progressive early in March who repeatedly referred to “other levers” beyond traditional rate filings available to maintain profitability.

Related article: Why You May See Less of Progressive’s Flo In Your State

At Progressive, the other levers included slowing down advertising, changing billing plans and more restrictive underwriting. At Allstate, Parsons described pricing refinements made possible by telematics to offer fairer rates than traditional rate plans. “The newest version of Drivewise provides an incentive for safe driving by offering discounted rates based on how you drive and discourages higher risk driving,” she said.

What’s Driving Rising Auto Insurance Losses? Auto claims frequency is not driving up auto insurance losses, according to Allstate Property-Liability President Glen Shapiro. During a special investor event last week, Shapiro reported that Allstate brand auto property damage frequency remained below 2019 levels by 13.3 percent in the fourth quarter of 2021 and 19.8 percent lower for the full year even as miles driven rebounded from the low levels recorded early in the coronavirus pandemic. Still, certain patterns have shifted, he said, noting that claims reported for accidents occurring during traditional commuting hours have remained pretty well below pre-pandemic levels, but that non-rush-hour claims have essentially reverted to historical norms. “The increased portion of miles driven during times with less road congestion is likely one of the leading causes of a larger proportion of high-impact accidents and increased injuries,” he said. Reviewing all the claim cost drivers, Shapiro reported that:

Severe high-impact claims caused by high-risk driving behaviors are part of the problem that all insurers are facing, Shapiro noted early in the conference. While he showed slides with data similar to information presented by Progressive detailing soaring used car prices and rising parts and labor prices, he said that higher impact non-rush-hour accidents are another driver of rising claims severity. Those are “driving a shift of more complex and costly treatments in casualty claims, as well as greater attorney representation.”

Used car value jumps were responsible for 60 percent of the six-point jump on the physical damage side, and parts and labor cost inflation contributed another 20 percent. The final 20 percent came from higher-impact accidents, he said, adding that higher speed accidents are putting more damaged cars in the total loss category.

Beyond rate hikes, telematics-based refinements and state-by-state pricing considerations described by Parsons, Brandt flagged Allstate’s investments in technology and strategic partnerships with suppliers and repair facilities as important tools for combating claims severity. He also described the use of predictive modeling to increase claims handling efficiency and investments in talent—specifically in teams of data scientists, on-staff medical and legal experts able to review complex claims and separate out the easier to handle “low-touch” claims.

Predictive models used at the time of first report of a claim help the carrier to figure out quickly which cars are repairable and which ones should be totaled or sold for salvage. “Our data scientists have used our own proprietary data to improve total loss predictability at first notice of loss by 200 percent over the past 12 months,” he said, later revealing that Allstate expects to boost staff of the claims data science organization by 125 percent over the two-year period that started in 2020.

Using predictive models, low complexity claims are determined upfront and routed for low touch and low cost claim handling, Brandt said. “On the casualty side, claims that have a higher likelihood for bodily injury, legal risk, or even potential fraud are determined early in the process” so more sophisticated resources can be engaged.

What About Social Inflation?

It was the legal risk that got the attention of one analyst listening the presentation, who asked Allstate executives to weigh in on social inflation trends, and the prospect of more attorney involvement in personal auto claims.

“We don’t predict it but it also doesn’t mean we accept it,” responded Allstate’s Chief Executive Officer Tom Wilson. “We work aggressively to make sure that the number of claimants [who] feel that they need an attorney is lower” after being hit by one of Allstate’s customers, he said, turning to Brandt to describe more specifically what Allstate does to manage attorney representation rates.

“This all goes back to our investments in a series of well-placed bets on what it is we think will help us to be able to control rising inflationary trends,” Brandt said, again referring to the roles of data scientists, and in-house medical and legal expertise in combatting inflation. By controlling loss costs, Allstate can creates a “flywheel effect of better price in the market for our customers and hitting our profitability targets,” Brandt said.

Contrasting the recent jumps in normal CPI with social inflation, Brandt said the latter “has been rising at a pace on a multiyear basis,” with higher medical treatment costs and increased attorney involvement both contributing.

“We can’t forecast what will happen from an attorney representation perspective. What we do is we leverage exceptionally granular data to track everything from advertising rates, spot TV purchasing, clusters or density of attorneys and involvement.” From that data, Allstate can sort out what matters are at risk for elevated outcomes. By detecting that early, the carrier can “activate systems and methods that best mitigate that risk,” he said.

During his presentation, Brandt also discussed Allstate’s digital claims tools, including virtual estimating through a process that allows customers can submit photos through the Allstate app, and “Virtual Assist,” allowing body shops to video chat with adjusters in real time. “We’ve seen greater customer adoption of our digital claim tools while reducing loss adjustment expenses by 1.2 points since 2018,” he reported. This represents an approximate financial impact of half a billion dollars to our income statement in 2021 based on earned premium levels.”

Still, the inflationary trends in 2021 resulted in a negative turnaround in underwriting results as the year progressed last year, with Allstate reporting auto insurance underwriting income of $1.7 billion during the first-half of 2021, but an underwriting loss of $459 million in the second half of the year, Shapiro reported at the beginning of the special topic investor call—”Focusing on Current Auto Insurance Operating Environment.”

Parsons gave another take on the tough road ahead, noting that combined ratios were 96 or higher in about half the states for Allstate in the second half of 2021. In contrast, between 2017 and first-half 2021, almost all states had underlying combined ratios below 96.

While the distribution of states above and below the mid-90s target is similar to the 2015-2016 timeframe when there was a spike in accident frequency, the breakdown of results above 96 is different. In 2015-2016, hardly any states were above 100; in the second-half of 2021, a high proportion of states came in greater than 100, representing roughly 55 percent of Allstate’s written premium.

While both Allstate and Progressive are providing robust disclosure of rate changes by month, Allstate has not yet disclosed combined ratio results for 2022 to give an early read on how well the rate changes and other levers to move the company toward profitability are working.

A few days before the Allstate special event, however, Progressive did report results for the month of February and the year to date. Carrier Management has summarized the Progressive results below, along with comparable results for prior years. (Editor’s Note: Net realized losses for 2022 contributed to the drop in income at Progressive this year.)