Speaking on an earnings conference call on Monday evening during which executives reported first-quarter net income of $590.6 million, W. Robert Berkley, Jr., president and chief executive officer, focused part of his opening remarks on the fifth straight quarter of double-digit premium growth, explaining the impact that economic inflation has on the top line.

“The majority of the policies that we write are based on or priced off of exposure,” Berkley said, explaining that the company prices most of its policies by applying rates to exposure measures such as payroll, revenue or receipts for casualty and appraised value for property lines. “In other words, if you own a deli and you are charging $1 more a sandwich, and we are pricing your [general liability], we are pricing off of your revenue and your receipts. Consequently, the premium is going up as your revenue and receipts are going up,” he explained.

“That is separate and distinct from rate.” Rate, he said, is a separate activity. “Economic inflation, to a great extent, is contemplated in exposure growth.”

“I mention this because people are grappling with what is the impact of economic inflation on our business model,” he said. “Certainly, we are not insulated from it [but] the majority of our business activities, the pricing, if you will, feeds off of exposure,” he said. 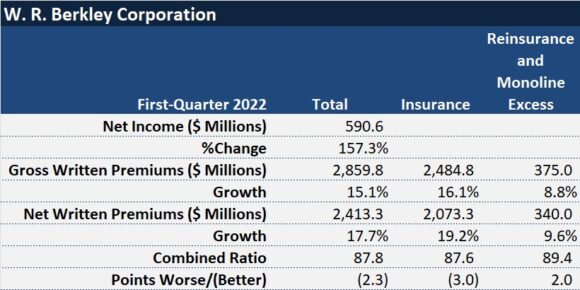 Taken together, gross written premiums climbed 15.1% to $2.9 billion, a record for the quarter, and net premiums jumped 17.7% to $2.4 billion record. Part of the growth in net premiums was driven by a decision to retain more business rather than reinsuring it, Chief Financial Officer Richard Baio reported.

By line of business, professional liability and general liability had the highest jumps, 28.5% and 23.5%, respectively. The only lines for which the carrier did not record double-digit premium growth were workers compensation (5.8%), monoline excess business (8.2%) and property reinsurance (-1.1%).

The leap in net income was attributable to a more than 50% increase in underwriting profit, which rose to $274 million—bringing the combined ratio down 2.3 points to 87.8—and growth in net investment income of roughly 9.5 percent. While those two items translated into a 52.1 percent jump in operating income, the rest of 157.6% surge in net income was explained by a more than seven-fold jump in realized investment gains. Investment gains included realized gains from the sale of the real estate investment in London of $251 million net of transaction expenses and the foreign currency impacts, Baio said.

During the earnings call, Berkley didn’t limit his commentary on premium growth and underwriting results to exposure growth. He did also offer that the rate component of the company’s 17.7% jump in net premiums came in at 8.3% for lines other than workers comp. In addition, he said that W.R. Berkley is charging “just shy of 2% more for new business relative to renewal business” and is retaining 82% of the business that comes up for renewal. “To get the growth, we’re not churning the book. We are keeping the portfolio intact,” he said, referring to the renewal figure as “a very healthy number” that could be viewed as an invitation to keep pursuing additional rate.

But rate is not always the priority, he stated. “We look at this business by operating unit, by product line, and are constantly assessing the margin that we believe exists in the business. And there is a constant rebalancing that we are doing on a daily basis as to what type of rate we need, what margin we think is in the business,” determining whether rate growth or exposure growth is more of a priority.

“At this stage, we feel very good about the available margin,” he continued. “And as a result, in many product lines, we are willing to allow exposure growth to be the priority over rate, though not across the board.”

Still, analysts were focused on the question of whether rate hikes were keeping up with upward trends in loss costs driven by both economic and social inflation. “There is reasonably compelling evidence that the rate we are achieving is in excess of loss cost trend by something that would be measured in hundreds of basis points,” Berkley asserted. (Editor’s Note: 100 basis points is equivalent to 1 percent)

Asked specifically about social inflation, Berkley, who said he’d been labeled “Chicken Little” in the past for his early warnings about litigation trends, said that “social inflation persists” today. “Anyone who doesn’t see it probably either needs to slip on their glasses or look a little closer,” he said, adding that while social inflation is more severe in certain regions of the country, “it’s pervasive across the nation.”

The Table Is Set

Still, Berkley is quite optimistic about the near-term prospects for W.R. Berkley looking out over the next two years.

“Beyond just the [quarter’s] results, which…speak for themselves, I would suggest that perhaps what is as [exciting], if not more exciting, is quite frankly how the table has been set for what is likely going to be a very strong balance of 2022. Additionally, how things are being set up for what should be a very strong ’23. And with every passing day, there are more pieces being put into place that would suggest that it’s more likely than not that ’24 will also be very promising as well,” he said, during his opening remarks.

Several analysts asked the specialty insurance company leader to support that rosy multiyear forecast during the balance of the call, and the CEO pointed to both investment portfolio and underwriting portfolio to address the questions.

On the investment side, he said that the book yield on the portfolio was 2.2%. “Given where interest rates have gone, our new money rate in the quarter is approximately 100 basis points above that,” he said, inviting analysts to “do the math” to figure out what does the 100 basis points benefit means for future investment income.

On the underwriting side, Berkley referred to the differential between rate and loss cost trend and the time it takes for written premiums to earn into underwriting income calculations. “For every day that we’re writing business in ’22 that goes by, and we’re earning it in over 12 months, and we’re achieving rate that we believe is comfortably above trend, that bodes well for what the outcome is likely to be,” he said.

Finally, he said there’s no “on-off switch” on market conditions. “The market doesn’t [follow] a great trajectory and then all of a sudden, the bottom falls out,” Berkley said, also suggesting that when rates fall for lines that have been well priced, prices will tick up for those that have been underpriced.

“Let’s use workers compensation as an example. Workers comp for the past several years [has] been a very competitive market. [And] ultimately, if history is any indicator for what we should all be expecting, eventually, it will end in tears for the industry.”

When the workers comp market turns, “that is going to be offsetting, is what I’m suggesting, other product lines that may have peaked and are going the other way,” he said.

“It’s almost as if they don’t understand the inflationary environment that we’re operating in,” Berkley said.

As for specialty markets, he said, “the competitors that we view as real competitors, the ones that we respect, they’re basically the same names today as they were two years ago.”