The Allstate Corp. this week announced estimated catastrophe losses for the month of March of $638 million pre-tax, and an estimated $827 million pre-tax for first quarter 2016, in the wake of severe hailstorms in the Southwestern and Southern U.S.

Catastrophe losses occurring in the first quarter comprised 17 events at an estimated cost of $830 million pre-tax, partially offset by a minor reserve re-estimate of prior reported catastrophe losses.

“These storms, one of which ranks as the largest hailstorm to ever impact Allstate, produced unusually heavy damage to both homes and cars given the size of hail and wind speeds,” Thomas J. Wilson, Allstate chairman and chief executive officer, said in a statement. 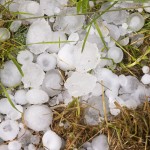 Two severe hail events, primarily impacting Texas in March accounted for two-thirds of the catastrophe losses for the quarter, according Allstate. The larger of the two storms occurred on March 23 and extended from Texas to Florida.

It produced violent thunderstorms with 2.5 in. hail and 65 mph winds in Texas, and 1 in. hail and similar winds in Florida. The smaller of the two events occurred during morning rush hour on March 17 and produced hail as large as 2.75 in. in Texas and 1.75 in. as it moved east into Louisiana.

The cities of Fort Worth and Arlington saw the greatest amount of damage from the storm.

Allstate’s claim volume has been heaviest in Collin, Dallas and Tarrant counties where the Allstate brand has estimated market share greater than its statewide average, according to the carrier.