In a nearly three-hour rate hearing on August 25, representatives from Florida’s Citizens Property Insurance Corp. delved into and defended their recent rate filing, which included significant increases in many Florida regions, before the Florida Office of Insurance Regulation (FLOIR).

Insurance Commissioner Kevin McCarty, who led the FLOIR panel, opened up the hearing by emphasizing that Citizens is not under fire for its submitted rate proposal.

“This is a fact finding hearing – it is not an adversarial hearing,” he said. “The office has not made a decision relating to the filing… the office is not advocating a position for or against Citizens in this rate request hearing. We are trying to get at the facts for the citizens of Florida.”

“I want to be crystal clear on this issue: water losses are the major reason Citizens is seeking rate hikes for the coming year, especially in South Florida. Were it not for water loss… 99 percent of South Floridians –Miami-Dade South Florida policyholders would be seeing rate decreases,” Gilway said.

Gilway described the rise in water damage in South Florida as “very disturbing.” He said two years ago the frequency of water loss damage was 8 percent and has since risen to 13 percent, with the company now seeing an average of about 1,000 water damage claims a month. The average water damage loss 2.5 years ago was $9,000 and today is closing in $15,000, he said. 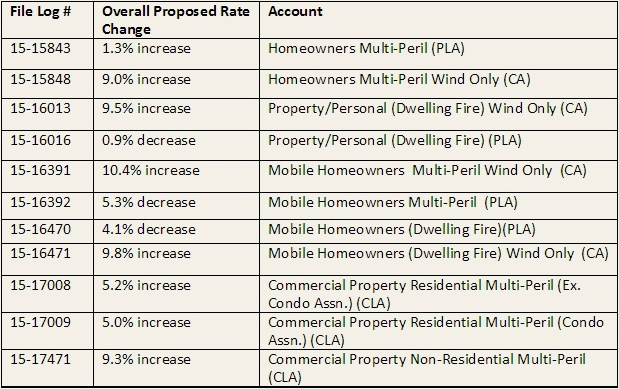 McCarty said FLOIR and Citizens have been in correspondence over the rates that were filed and Citizens has supplied FLOIR with all the necessary data to back up its rate filing. As a result, FLOIR’s questions were in regards to three primary areas:

McCarty started the hearing by applauding Citizens’ policy count reduction by almost a million policies over the last several years, calling it a “Herculean effort” on the part of Floridians to remove billions of dollars of assessments that could be levied on all policyholders. The clearinghouse and takeout efforts have been successful in returning policyholders to private sector, he said.

“I commend you and your team for the work you have done and the leadership and strides you have made to make that depopulation effort a success in our state,” McCarty said.

However, while Citizens rate proposal lowers rates overall for 60 percent of its personal lines policyholders, Gilway said, the company is seeking an average 3.2 percent increase in statewide rates for personal lines customers, which reflects both longstanding disparities in wind-only rates and recent challenges relating to water losses, he said.

In the wind and coastal areas, Gilway said Citizens has become more of a residual market.

He added, however, that though their policy count is the fewest it ever has been, the policies that remain with Citizens are those in high-risk areas.

“We will follow the glide path for every individual policyholder,” Rollins said. “No matter how scary some of these cost drivers might be in pockets or regions no one will get more than a 10 percent increase in premium with a very small exception of passing through any rapid cash buildup demanded by the Florida CAT Fund.”

McCarty questioned why Citizens purchased so much reinsurance, which it cited as one of the reasons for the rate increases for wind exposures, when the company’s business and exposure have decreased by 35 percent.

Rollins responded that Citizens has to be able to reinsure a 100 year event to avoid an assessment risk and, questioned if Citizens should reinsure itself like a private company which has to have its portfolio protected up to about 25 to 30 percent. If the answer is “yes,” Rollins said, then the company should have actually purchased more reinsurance than it did. Rollins also added that with reinsurance rates being so low at the moment it made sense for the company to take advantage and have a more secure risk transfer solution.

Gilway said Citizens is focused on combating the water damage loss problem, Gilway said. The company recently had a “water summit” where it brought together legal, underwriting and policy experts to develop strategies to counter the problem.

The company is also working with insureds to let them know to call Citizens first before contacting an attorney or public adjuster, as well as putting an enhanced focus on fraud awareness and working in conjunction with DFS. Rollins said 90 percent of all the representative water claims come from Miami-Dade and 30 percent of those claims the company never gets to look at as they come from a public adjuster.

Rollins said the company is putting great effort into what is causing these water issues, but actuarially they have not been able to find a trend or cause for the increase. But the bottom line is that the trend is costly for everyone, Rollins said. “This trajectory is not good for consumers.”

McCarty concluded the testimony by saying FLOIR will carefully review the information that has been provided in the filing and encouraged members of the public to contact the office with any questions or concerns they may have about the proposed rate changes.

A representative for FLOIR would not comment on how the hearing will impact the office’s decision, saying FLOIR cannot comment on a pending rate filing. It has 45 days to review each of the filings and a rate decision on the homeowners, mobile homeowners and dwelling fire filings is expected on September 8 or 9. The other filing decisions will occur at a later date.

Public comments were received at the hearing and the general public is allowed to provide feedback on these filings via the ratehearings@floir.com email address until September 1, 2015.

The full hearing can be viewed here.