Thurs., Sept. 13, 11 am: Hurricane Florence was downgraded to a Category 2 hurricane yesterday as its maximum sustained winds decreased today to about 110 mph, according to NOAA. The winds were clocked at 105 mph today.

Florence’s rains have started to fall on the Outer Banks of North Carolina.

Little change in strength is expected before the center reaches the coasts of the Carolinas, with weakening expected after the center moves inland.

Even though it has been downgraded, Florence remains a large and dangerous hurricane, according to NOAA.

Storm surge as high as 9 feet in some places and extreme rainfall of 30 to 40 inches can be expected. Even a few tornadoes are possible.

NOAA warned of the hazards ahead:

STORM SURGE: The combination of a dangerous storm surge and the tide will cause normally dry areas near the coast to be flooded by rising waters moving inland from the shoreline. The water has the potential to reach the following heights above ground if peak surge occurs at the time of high tide:

RAINFALL: Florence is expected to produce heavy and excessive rainfall in the following areas: 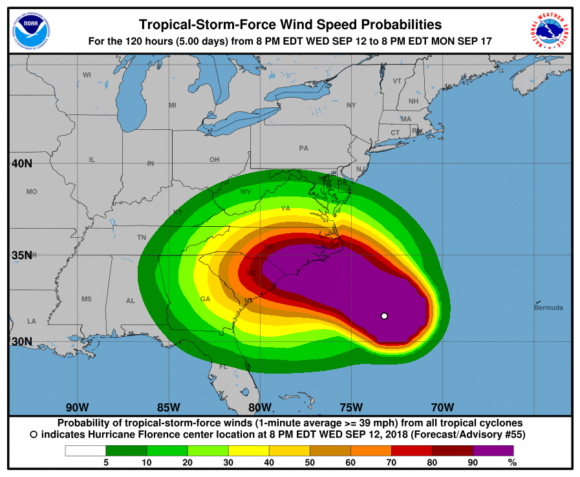 TORNADOES: A few tornadoes are possible in eastern North Carolina through Friday

SURF: Swells generated by Florence are affecting Bermuda, portions of the U.S. East Coast, and the northwestern and central Bahamas. These swells are likely to cause life-threatening surf and rip current conditions.