Upon landfall, winds were clocked at 105 miles per hour (165 km per hour), able to cause extensive damage, according to the five-step Saffir-Simpson scale. The hurricane also poses the risk of “catastrophic and life-threatening” flooding along portions of the north-central Gulf Coast, the National Hurricane Center said in an advisory around 6 a.m. CDT (1100 GMT).

The NHC earlier said the hurricane could bring more than 2 feet (60 cm) of rain to some areas as it creeps inland.

Sally made landfall at Gulf Shores, Alabama, and was creeping toward the Alabama-Florida border at 3 mph (5 kph). Its winds and rains will stretch from Mississippi to the Florida Panhandle, the NHC said.

Officials across the South had called on residents of low-lying areas to shelter away from the winds and rain. But for some, Hurricane Sally’s slow approach brought a chance to relive childhood memories of storms past, and to witness the power of nature first-hand.

Thomas Harms braved the wind and rains on Tuesday to watch the waves crash into the Fairhope Municipal Pier, and reminisced about past storms. As a child, he went with his grandfather to see storms arrive, and he did the same on Tuesday for his son.

“It kind of takes a little bit of the fear out of it and also help you understand the dangers of it too,” said Harms. “I’ve been kind of passing that on to my son in doing the same thing.”

Others joined him on the pier to catch a glimpse of what was to come.

“We were at home saying ‘we’re bored’, so I was like ‘how ’bout we go to Fairhope and see how bad it is out there.’ As you see, it’s pretty bad,” said Warren Babb. 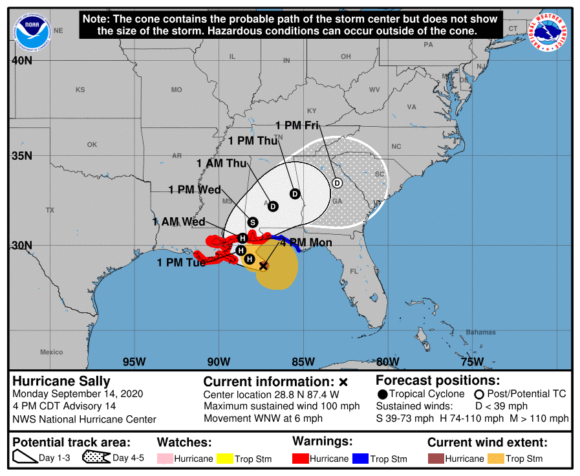 Damage from Sally is expected to reach $2 billion to $3 billion, said Chuck Watson of Enki Research, which tracks tropical storms and models the cost of their damage. That estimate could rise if the heaviest rainfall happens over land, Watson said.

Ports, schools and businesses were closed along the coast as Sally churned. As the storm track shifted east, ports along the Mississippi River were reopened to travel on Wednesday. But they were closed to vessel traffic from Biloxi, Mississippi, to Pascagoula, Florida.

Energy companies also shut more than a quarter of U.S. Gulf of Mexico offshore oil and gas production and some refiners halted or slowed operations.

Next Insurance Attracts $250M in New Financing; Its $631M to Date Beats Lemonade

Next Funding Round for Next Insurance May Double Insurtech’s Valuation to $2.25 Billion