California took the fast lane to the future on Tuesday when Gov. Jerry Brown signed a law that lets self-driving cars onto public roads.

Brown rode to the signing ceremony at Google Inc. headquarters in the passenger seat of a vehicle that steered itself, a Prius modified by Google. Google co-founder Sergey Brin and State Sen. Alex Padilla, who sponsored the bill, were along for the ride. An engineer for the technology company, Chris Urmson, sat in the driver’s seat, but the car drove itself.

Consulting firm KPMG and the Center for Automotive Research in Michigan released a report in August about how close the industry is to rolling out self-driving cars. They see the first such vehicles hitting showrooms in 2019, with a more developed infrastructure by 2025. 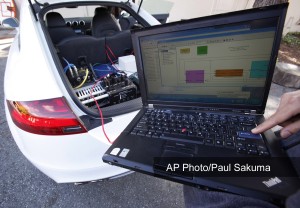 A question explored by global consulting and research firm, Celent, in a report issued earlier this summer that envisions a future of increasing emphasis on safety in the automobile industry and among government entities that leads to a massive drop off in auto insurance premium for U.S. property/casualty insurance companies.

Google has been working on self-driving technology since 2010, including testing a fleet of self-driving cars along California roadways.

Google’s driverless cars rely on video cameras, radar sensors, lasers and a database of information collected from manually driven cars to help navigation, according to the company.

The new law goes into effect next year and establishes safety and performance regulations for testing driverless cars, provided an operator is ready to take control if necessary.

However, it will likely take years before a fully self-driving autonomous vehicle hits the road, industry official say.

“I think the self driving car can really dramatically improve the quality of life,” said Brin, who pointed to uses ranging from aiding the blind, ferrying revelers who drank too much, to simply making better use of commuting time.

He added that by driving closer together more safely than human-driven cars, self-driven cars might cut congestion.

But Google has no plans to build its own driverless cars.

“We have had great conversations with a variety of automakers,” he said. “Anything we do is going to be in partnership with the industry.”

The technology has been in the works since the 1950s, when General Motors showed off “dream cars” with features such as autopilot. Recently, carmakers have started incorporating into today’s models some elements based on the innovations in those early vehicles, including adaptive cruise control or traffic-jam technologies that can slow the car automatically.